My friends found this photo of me on the internet. (I think it is a real estate type website).  It was taken in May 2017 outside of a pottery shop. How funny! 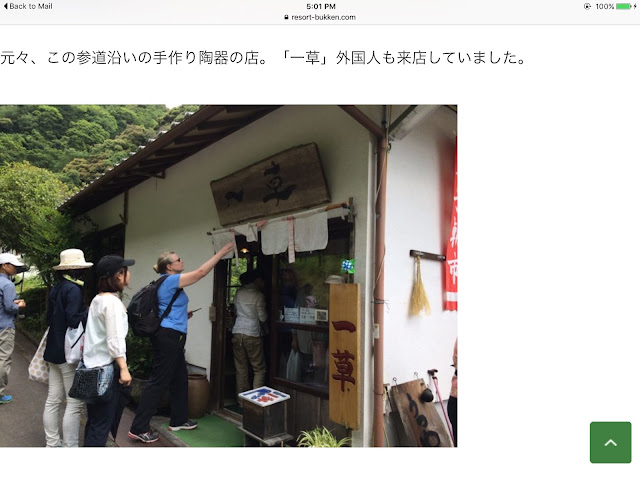 If it is a commercial web site, shouldn't you be paid, or at least have been asked your permission. After all, the text highlights that even foreigners visit the shop!

Yes, surprise!
That's why I don't load my family photos onto social media,
they could end up anywhere.

I love it! I often wonder how often that happens. I think a lot. My theory is never do/write/say anything you wouldn't want on the cover of the New York Times or in someone's vacation photo album! Someone asked about if you should be paid and all. When I was working for the station doing social media and television we originally had to get releases for anything like that. Then later, just a sign saying you might be filmed, etc. And finally the rules changed that if you are in a public spot, anything goes. That made it much easier for everyone. Especially bloggers!

When my daughter got a divorce, she had a yard sale. The sign she put out at the end of the road was a 4 x 8 plywood with letters in red paint "Divorcing the Idiot Sale". I swear we had people come to the sale that said they had to get a picture of themselves with the sign. Later, it turned up in one of those U-Tube videos that shows funny signs. The cops even showed up because "The Idiot" complained about the sign and wanted it taken off the road. He really WAS an idiot.
xx, Carol

Perhaps you should let them know you are not a foreigner now... more a local!