Okuda San and the ornament

I invited my downstairs neighbor to learn to make a little stitched ornament after she admired my needlework the other day.  She hadn’t stitched before.

This little ornament I made up was adapted from another I made, in order to make it simpler.  I don’t remember who the original designer was or exactly where I found the pattern.  I think it was in an ornament issue of a cross stitch magazine in some year past, but I can’t say for sure. 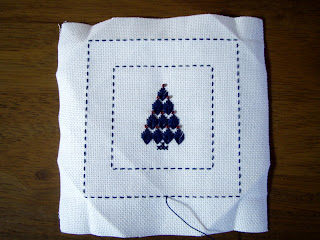 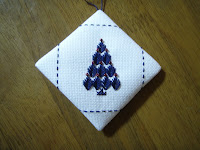 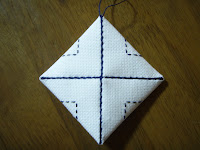 The one I made up is done on Hardanger fabric, with #8 perle cotton and Mill Hill seed beads, using the leaf stitch, the cross stitch, and the running stitch. The finishing was also very simple – folding it in on itself and joining the outside set of running stitches to close it up.


Before Okuda San and Tatsuma came over yesterday, I got everything ready and labeled everything with English and Japanese, so we would both know what was what. Ted told me how to say a few things, like “Come in, please” (I knew the ‘please’ part) and “Which color would you like?” I looked up the words like needle, scissors, and thread in the dictionary because stitching is not in Ted’s Japanese vocabulary. 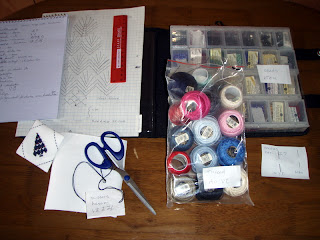 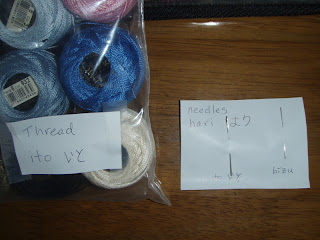 After her last visit, Ted pointed out that I was remiss in my Japanese housewife hostess duties in that I did not offer Okuda San a cup of tea.  When she came over today, I offered tea first thing and she accepted.  I had English black tea, not Japanese green tea, but that was okay. Tatsuma was a busy boy, exploring.  He used the wisk broom to sweep around and he played with a pot and a spoon and he climbed on the chair. 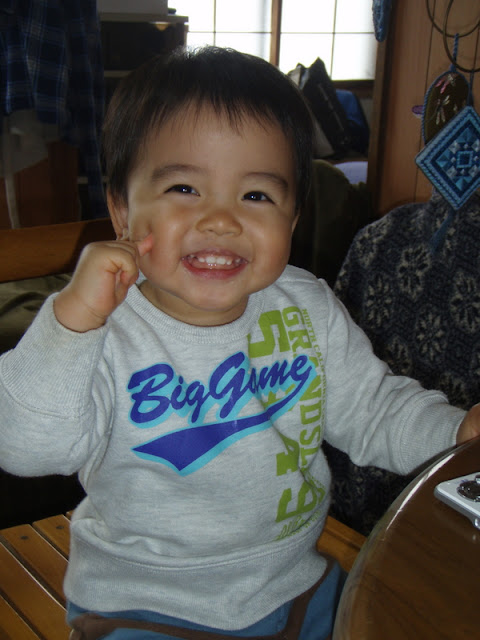 Three times he fell out of the chair and cried for about a minute, then climbed back in it.  Okuda San was very calm about it and said they had no chairs.  This may be why he wanted to climb on it. She was able to continue stitching, even with a crying boy in her arms. 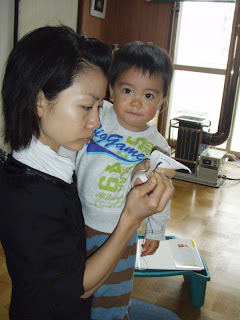 She stuck with it until she completed the ornament.  I think she was pleased with how it turned out. I was. 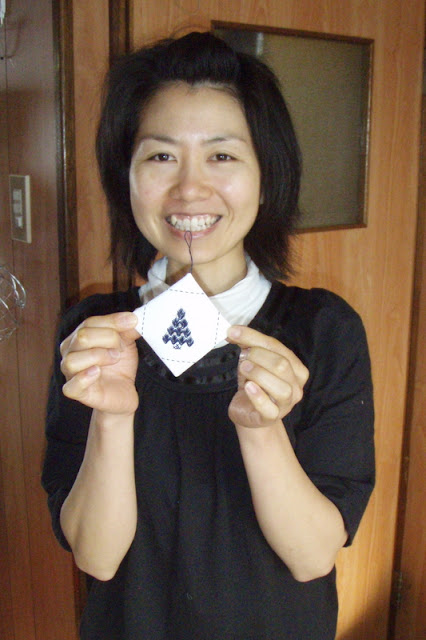 Very nice! It sounds like you are enjoying your time in Japan and learning and teaching too. Your blog is indeed becoming a journal of your life in Japan. There is a websie I must find you that I used last year that will print out your blog in a book form. I plan to do one for each year. I think it is blog2print but not sure.Will have to double check and email you.