In Japan, election campaigning lasts two weeks, not the months and sometimes years like in the USA!  You can see who is running on the boards that are posted around town.  You can hear who is running because candidates drive around the neighborhoods with loud speaker vehicles, like this one. Their words are wasted on me because I can't vote in Japan, but I always wave to them anyway. 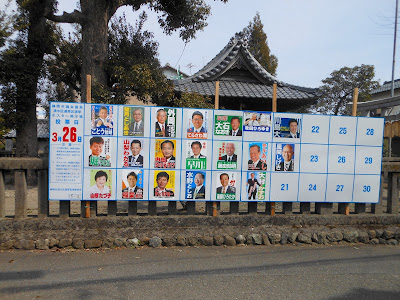 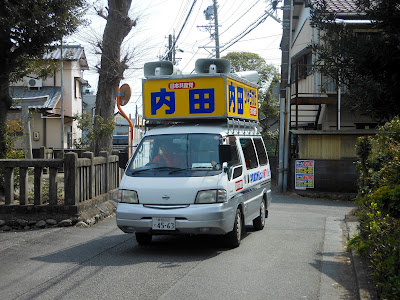 I remember the loudspeaker vans when I was in Japan several years ago. It was kind of surprising. Have you seen the documentary film Campaign (Senkyo)?

Hi Pamela,how interesting,this way too a lot of money would be saved and not spent on advertising.

I think that's a good idea too. Short campaigns instead of the long drawn out dramas that go on here. I honestly get fed up up with that.
Thanks for sharing.

Thank you for sharing the election in Japan. Reading blogs this past year and watching videos on Elections over the world this year -- I seriously question the US election process - We are suppose to be the land of freedom liberty and choices

These political loudspeaker vehicles get noisier and noisier as the Election Day approaches. In my district it can be TOO noisy!

Oh how I wish our election cycle was only 2 weeks....

Having CNN talk about the 2016 election for so long before it happened was ridiculous. I couldn't imagine it if Trump, Clinton, and the others had to yell from trucks! That would be a nightmare.

I agree with Beth, 2 weeks election cycle would be so good!!!

I don't think two weeks would cut it in the USA, but I sure do think campaigns should be cut short. Trump has already opened his 2020 campaign which allows him to start collecting money for it already, which is really a way for him to make more money off the NEXT campaign by sponsoring events in his Trump owned properties and charging the campaign. We need to get some laws change around here.

Oh wow, 2 weeks, that is short! In Germany, the campaigns usually run a bit longer, maybe a month or too, which is still much shorter than in the US. We don't get loudspeaker cars though!