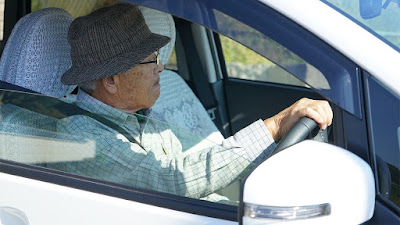 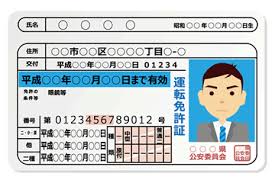 To prevent driving accidents involving senior drivers, Japan encourages the voluntary return of drivers' licenses.  In 1998,  the government introduced a system to return licenses.  Last year, 601,022 people in Japan returned their licenses, which was the highest number in any year.  Of those, 350,428 or 58% were people 75 or older. Currently about 30% of all license holders are 65 years or older.

In April 2019, an 87 year old retired high-ranking government official killed a mother and her three year old child when he suddenly accelerated while driving near Ikebukuro Station in Tokyo.  This brought a lot of media attention to the issues involving elderly drivers, which may have been the reason behind so many people returning their licenses last year.

Since 1997, Japan has had a law requiring drivers age 75 and older to display the Koreisha mark 高齢者マーク (elderly car mark) to indicate  aged person at the wheel.  A person age 70 and over should display the symbol if their age could affect their driving. This is the current required mark:

Are accidents involving elderly drivers a problem where you live? Is there an age limit for driving in your country? Do you think there should be?

(I do not have a drivers license in Japan.)

We don't but it's something to consider. Of course, we'd need more mass transit.

I do think that after a certain time, at least taking a driving test makes sense (in a car, not a written one!)

My father stopped driving when he was 87, but he didn't cancel his licence, just passed ownership of his car to me. He bought a mobility scooter for short trips, and took a taxi or I drove him places that were further away. After about 6 months he started talking about buying another car, because he was annoyed by the inconvenience. The whole family had been so relieved when he stopped driving, as he was a danger to himself and everyone else. I really didn't want him back on the road.

In this state you can report elderly drivers who you think are unsafe, and they can be called in for re-testing. So I sent a letter outlining my concerns. The licencing authority dealt with it by offering him a refund if he returned his licence. I don't know if he did that, but he stopped talking about getting another car, so it had the desired effect.

We are currently trying to get grandma's brother-in-law to give up driving. He's 84, half-blind and has dementia, so he really shouldn't drive anymore, but he has a hard time giving it up! They are working on laws that require you renewing your license every couple of years now (right now if you get your license once, it's good as long as you live in Germany), and if that happens they could also require a repeat exam and/or eye test when you do renew it, so that might be a step in a good direction.