Saturday I took the bus to Sapporo with my new friend Vicky. Vicky is an English teacher from Canada and we met at Haruki.  I had taken the train to Sapporo before, but this was my first bus trip to the city. Vicky knew about the bus, having taken it before. It took about an hour and was 770 yen each way.


I got into trouble soon after getting off the bus.  There was a panda display at a little clothing store and I touched the bears to see how they were attached.  A store clerk ran up to me with her arms crossed, which I knew meant "don’t do that".  I stood outside the store and took this photo. 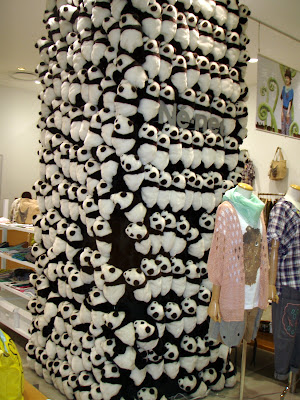 The clerk came running out of the store, again with the crossed arm signal.  At that point we decided it was time to move on.


My main errand for the day was to find the Kanariya store.  I had read about it on the blog of a New York quilter who had previously lived in Hokkaido.  I had the address and knew it was a block beyond Odori Park, near the TV tower. 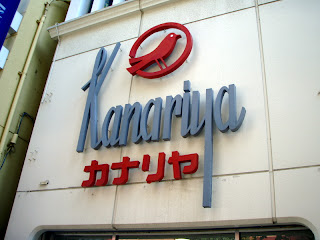 We found it!  Four floors of fabric, beads, and all kinds of needle crafting!  How is it that I am just now learning about this place after being in Hokkaido almost nine months?
There was a sign that said no photographs inside, so I didn’t take any, but I wanted to.  The fourth floor had all kinds of quilting fabrics and lots of what looked like fat quarters.  Maybe they were fat quarter meters instead of yards?  I’m not sure about that.  I think yarn was on the fourth floor too. The third floor had all kinds of beads – delicas, seed beads, bugle beads, bigger beads, jewelry kind of beads and everything you need to do every kind of thing with beads, plus all the DMC and Cosmo threads and silk ribbon and linen and aida fabric and pattern books and kits and trim and embellishments.  The second floor was full of what I would call clothing type fabrics and buttons and zippers and elastic.  The bottom floor had sale fabrics.  I only bought a meter of tulle and a ball of perle cotton #12, but I’m sure I will be back again.  I now have a “point card”, which is what store loyalty cards are called here. Vicky was patient while we looked at everything in the store. She was very helpful in translating about the point card for me.
There was some kind of street festival going on and we stopped to watch these young dancers after we left Kanariya.  It seems like there is always some kind of festival in Sapporo. 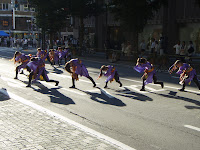 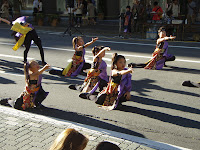 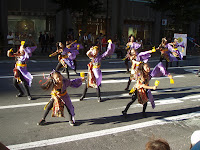 After eating dinner at a Chinese restaurant, we headed out to the bus stop just as the bus was pulling up.  How lucky was that? I enjoyed spending the day with my new friend and exploring Kanariya.
Hardanger finish
I did the little backstitch around the edge, then cut the outside fabric off. 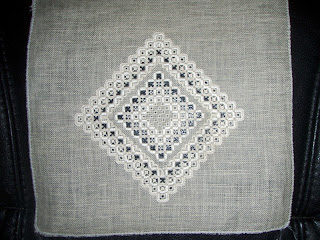 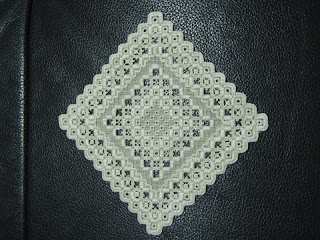 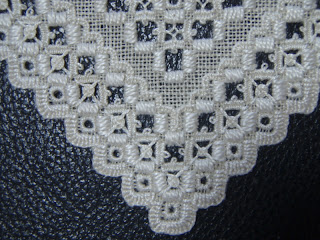 This is why I needed to buy the tulle at Kanariya.  The directions for the hardanger petite square pillow said to stitch two layers of tulle to the inner part of the square, which I did.  If I were to do it again, I’d only put one layer. The purpose is to keep the lavender from falling out the cutwork holes and I think one layer would work fine.
Next I attached a square of fabric to the back, leaving an opening for the lavender. 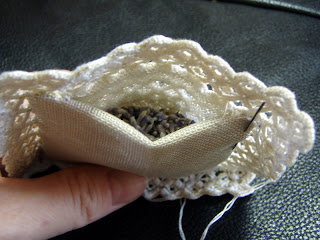 After the lavender was inside, I stitched it closed and it is finished.
I like how the outside edge is beyond the sachet part, making it look so delicate.  I wish you could smell it! This dried lavender was grown in Hokkaido and smells wonderful.
My next project is another hardanger piece. 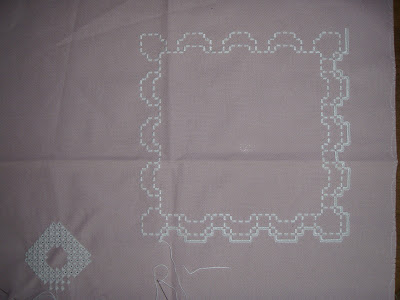 I hadn't done much on it.  I don't know if I put it down because there is a counting mistake or maybe just because it is pink. This pattern comes from the April 1997 issue of Cross Stitch & Needlework magazine and the designer is Lynne Hermanson.  It's called Hardanger Doily and the photo in the magazine is of a pink doily.  I don't think I would have chosen pink of my own accord. It looks like I started an ornament in the corner of the extra fabric that is also unfinished. Maybe I can finish both the doily and the ornament.
Posted by Pamela at 5:00 AM

Well done for your adventure to Kanariya. I know what you mean about the "no photographs" shop assistants. As if we would be indulging in industrial espionage! The Hardanger lavender pillow looks just beautiful. I am in awe of your perfect picots. As I have the self same pattern I will try it sometime and using your suggestions see if I can achieve "Pamela Picots of Perfection"