Did  you ever see the movie Cool Hand Luke?  It's one of my favorite movies.  In one part of the movie, Luke bets with his fellow prisoners that he can eat 50 hard boiled eggs in an hour.  Whenever I hear about eating contests, I always think about Luke eating eggs.

I often read about eating contests in Japan. Just the other day I read about a 28 year old man who died after participating in an onigiri (rice ball) speed eating contest in Hikone City in Shiga Prefecture on November 13th after a number of rice balls became lodged in his throat. He was given medical attention, but died in the hospital three days later.

Iwate Prefecture hosts soba noodle eating contests. These soba noodles are served in small bowls in a tradition that began 400 years ago. People eat hundreds of these small bowls of noodles!    I like soba noodles, but one regular bowl is all I can eat. 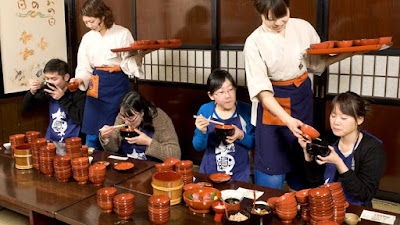 Have you ever been in an eating contest?  What and how much did you eat?

Hi Pamela,i watched a pie eating contest on TV and it was grose,pie was going everywhere ,lol,but i have never been in one.

Fancy dying from a food eating contest!! Doesn't do much for me and I wouldn't be interested in trying one.

Great film - I can't imagine taking part in anything like that! xx

I had Wanko soba in Iwate many years ago. There was a waitress standing behind me and as soon as I had finished one tiny bowl, she tossed in another mouthful in that bowl. When you can eat no more you are supposed to put the lid on the bowl before the waitress adds the next portion, but these waitresses are QUICK.
It was very sad that the onigiri eating man died, but I'd say it was self inflicted.

Is that called entertainment?
Soba noodles are good.

I prefer taking my time and enjoying my meal :D I have to admit that it is kind of impressive seeing people eat so much so quickly (I remember seeing a video of a tiny woman eating a massive burrito - I think it was 8 pounds or something - within minutes) but I still think it's a waste of food to eat so much more than you need (and I don't want to know how many of these end up throwing up afterwards).

Well, I have seen plenty of eating contest winners on TV! Lots of times a Japanese person wins. I think the last one I saw was just a tiny girl. I will never understand the desire to participate in these contests, though I must admit I don't recall hearing what the price would be. Perhaps a year's supply of whatever they ate in the contest?

Gosh I love Cool Hand Luke!! Paul Newman was one of my very favorite actors. I saw him once at the races. His eyes really WERE that blue. I'm a sucker for blue eyes. Luckily Terry's eyes are blue..when he wears blue.
xx, Carol

I don't know how they do it. I've never seen one live and I don't think I would ever want to see it. The idea of it is kind of nauseating. Some of these people can get seriously ill from force feeding themselves so much in so little time.