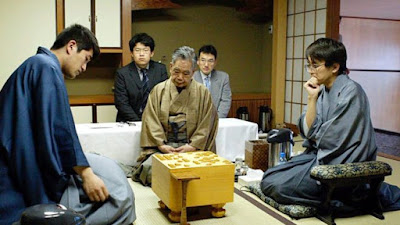 Have you heard of Shogi, or do you play?  The game of shogi is sometimes called Japanese chess.  After being in Japan almost five years, I have only just recently learned about this game.  This is an intro to the game from Richo.com

Shogi is a Japanese board game played by two players.
The object of the game is to capture the opponent's King.
Shogi is played on a nine-by-nine board. The vertical rows are called files, the horizontal ones ranks or just rows.
Each player has twenty pieces: one King, two Gold Generals, two Silver Generals, two kNights, two Lances, one Rook, one Bishop and nine Pawns.
The player moving up the board and making the first move is referred to as black and his opponent white, although in Shogi sets all pieces have the same colour.
They are differentiated only in direction: pieces pointing away from a player are his. The pieces lie flat on the board and have their Japanese name written on them.

The game has been in the news lately after a high level player was accused of cheating with a smart phone in a tournament.  Shogi apps rival and sometimes outperform human players.

In the past players have been allowed to check their smart phones during lunch breaks and when they leave their seats temporarily.  The Japan Shogi Association has now banned players from bringing smartphones into match venues. The phones must be kept in lockers during the tournament.  The new rules will become effective on December 14th.  Offenders face expulsion from the professional players association.

Email ThisBlogThis!Share to TwitterShare to FacebookShare to Pinterest
Labels: Shogi

I used to read a lot of Japanese comics growing up, so I've heard of Shogi but never learned it. I did learn go when I was in college. I always though it was given that cell phone are not allowed during tournament games. Same way they're not allowed when taking exams.

I haven't hear of this game before. It is a shame people feel the need to cheat in these kind of games.

Same as D1-D2, I've read a lot about Shogi but never actually looked at the rules. It looks so complicated, although it probably isn't much worse than 'normal' chess!

I have never heard of it. My husband tried to teach me Chess, but he is someone that likes to play HIS pieces and MY pieces too so I gave that up.

I guess it's just in some people's nature to cheat or at least attempt to cheat. Sad.
xx, Carol

Oh what a shame... the pressure/desire to win causes people to do stupid things! Sounds like an interesting game though.