The National Police Agency in Japan reports there are 17 million drivers age 65 and over in the country.  Recently, aging drivers have been in the news after an 87 year old driver in Yokohama drove into a group of elementary children.   One six year old died and 11 others were injured.

Last week a 97 year old high ranking Buddhist priest returned his driver's license because of this controversy over elderly drivers. Originally the priest wanted to keep his license to drive until he turned 100, but decided it was stupid to try to maintain his license out of pride. He encouraged other elderly drivers to be safe and give up their licenses. 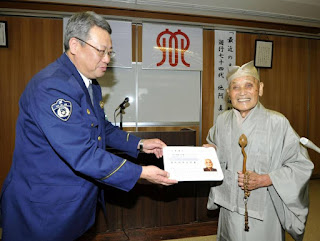 I can understand wanting to stay independent, but there comes a point when it is safer to stop driving.  Do you know anyone who is still driving when he shouldn't be?  Or, on the other hand, do you know an elderly person who is still able to drive safely?  I don't drive in Japan, and may be quite old when I go back to the US.  I think I will be fine not driving when I'm elderly, but time will tell.

Hi Pamela its a very interesting question and one i had with my parents recently.

It is very nice hard to give up independence I would think, my Mum stopped driving at 60 which was wonderful,as she was dangerous. Friends had to report their father to the police tomget his license taken away as he was dangerous but thought he was fine!! On the other hand a friend is 91 and still driving well, just short distances now though.

A friend of Dad's drove on snowy and icy roads in Sweden until he was 95. Luckily he never had an accident but I was glad to hear he had sold his car.

Wow. What a tragic event. My heart aches for the families and children involved.

My mom is a safe driver. However, I drive her to all of her appointments outside of the town she lives in. She lives quite close to the local places she travels to, so only drives short distances.

I do know someone that moved to a new state and needs to go to the Department of Motor Vehicles (DMV) to have their address change recorded. This person keeps asking a relative to drive them to the DMV to have a new drivers license issued from the state they now reside in. Sadly, their health has declined to the point that simply buckling their seat belt is a challenge. However, they insist there is no reason they cannot drive. Thankfully, they have the sense to be asking someone else to drive them to get their new license. The relative being asked is curious/apprehensive about whether this person will be approved for the driving license or if they will be issued a government identification card instead.

I was once at the DMV to have my license renewed. The elderly gentleman in line before me was also there to have his license renewed. He failed the vision test, but was issued a temporary license (I think it was good for 3 weeks) to allow him time to see an eye doctor and to get a new set of glasses. Although I understood the importance of being able to get to and from the eye doctor, it made me nervous knowing people were allowed to drive when they could not see well enough to pass the vision exam.