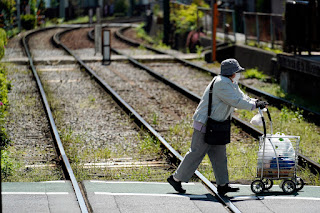 With all that is going on in the world, we are all feeling uneasy these days. There has been much in the news with how we are coping.  In many places in the world, people are required to stay indoors.  People are baking bread, reading books, knitting sweaters, exercising in small places.

Some people are shopping. In Japan, we are not locked down.  The government requests that we stay at home if we can, but there is no penalty if you don't. In the last couple of weeks, I have been reading more and more about elderly hoarding. Younger and middle aged people have to work and have more family responsibilities, especially with children out of school, but many elderly people don't have these responsibilities and have a lot of time. Maybe they have lived through leaner times and are afraid of not having what they need.

Retired people are able to start lining up early in the morning, hours before the stores are open, to buy available masks, hand sanitizer, and other hard to get items, in addition to toilet paper, rice, and other readily available items. They are able to go to multiple stores during the day.  Working people are complaining that by the time they are able to shop, the stores are sold out of that day's allotment of items.  Things have gotten worse in the last two weeks since the Prime Minister declared a State of Emergency.

This sounds dangerous to me. Not because some people will do without food or toilet paper, because the stores just put out more the next day.  I think it is dangerous because the elderly are at higher risk if they contract the coronavirus. Standing in line and going to crowded stores for items that are not really needed is crazy.  Japan doesn't seem to have embraced the social distancing idea like other places.

I don't know what the answer to this is, or if there is an answer.  Some people will continue to shop and hoard and others will continue to be upset that they can't buy what they want. Previously, I grocery shopped every other day or so to get fresh food and to not have to carry so much at one time.  In the last month or so, I have change to shopping only once a week to avoid the crowded grocery store.  I have been able to get what I want and have no complaints about what is available.

Is elderly hoarding an issue in other places? Are you able to find the things you need and want when you are shopping?

Elderly hoarding cannot be a problem in NZ as anyone over 70 is not allowed to leave their house.

That is something to think about. I notice older people seem to be more fearful in general. Maybe they think hoarding is some kind of a safety net. Can hoarding protect us from getting a virus, no.
Also I notice many older people seem to be addicted to bad news and they watch and listen to it all day and night. That's terrible for anybodies' mental health.
That kind of negativity is a recipe for hysteria.
I read a quilt blogger's post recently and she said, ' I live in fear,' really?
What's with that? Kind of like a Lemming following all the others off a cliff.

Winston Churchill said, 'We have nothing to fear but fear itself.' How to help people with panic mentality I don't know but it starts with being aware.

That's interesting. I haven't heard of elderly hoarding here. Just hoarding. Most of those I saw in the stores with overfull carts (back when I was in the stores, which has been six weeks) were not particularly elderly. Now they have senior hours here and some of those, I'm told, are wilder for shoppers than regular time.

A correction to the quote above -- "We have nothing to fear is fear itself" was part of FDR's first inaugural speech.

Hoarding seems to be happening over all ages here, it started before we had the stay at home rules. The supermarkets then had elderly shopping hours, usually early in the morning to give elderly people and their carers a safe time to come and shop. People over 70 here are not supposed to be going out at all to try and keep them safe and healthy. I know of families where the children (in their 40's) are shopping and delivering for the parents so they do not have to go out at all except for medical appts. I am surprised the Japanese government hasn't brought in stricter measures. I guess many of the elderly have been thru the depression and WW2 so are gathering supplies while they can, fear of the unknown is very real.

From what I saw in the media, the people doing the crazy hoarding here were younger, rather than older.

I have signed up for a grocery pick-up service. Products are ordered and paid for online, then I drive to the supermarket at a given time and someone brings out all the items packed in shopping bags, which I then load into the car. I am doing the buying for my household and for my father. He is in his 90s and I don't want him going anywhere near shops.

Hoarding definitely was going in the very beginning of when this virus hit. I don't go to the store often, just if I need something. But I admit that if I see TP when I go, I pick it up just in case someone in the family needs it. The house we are moving to has 3 bathrooms so I guess if I don't gift it away, each one will have an ample supply. I would love to get my hands on Lysol, even though I make my own disinfectant spray, I use Lysol in the air and for odors.

Being 68, I qualify for shopping during the "saved for the elderly" shopping hours but honestly we just don't get around that early in the morning.

Pamela: elderly hoarding is not in my area however the younger people the gen xer's and the millennials are hoarding terribly, the ones who are working.
Target is now limiting how many items of the same can be bought.
This is a very scary time.
Stay Healthy
Have a great weekend

I've not been out the house for 46 days now. My children have been buying food and leaving it on the doorstep until 3 weeks ago when I was awarded an online food delivery slot at a supermarket. I order what we need and they deliver Friday mornings. Some things are not delivered if they haven't got them, some they substitute what they think we will want instead. We've had empty shelves my son tells me and at the moment flour and eggs are in short supply. Things have been limited to 3 of each item per person for a long time. For me, its been like watching a scarey movie with not being out and seeing it myself.

I heard Japan is having a bit of an issue with the staying inside/social distancing thing...maybe because many of the apartments are so small they feel uncomfortable more quickly?
I don't know that elderly hoarding is a problem around here, but many older people don't seem to take it all that serious anyways. They sit outside in groups talking and get close to people in the stores. All while I am being careful to protect those at high risk! It's crazy.