Every Day is a New Adventure

I go to Sapporo once a week for my classes. First, I walk about 20 minutes to get to the bus stop.  Busses come about every 15 minutes, so I don’t keep track of the exact times. I just know one will soon arrive.  When you get on the bus, you pull out a tab with a number that tells you where you got on, so you know how much to pay when you get off.  This week I got on the bus and pulled the number, like I always do.  When I sat down and looked at my tab, I saw it said 6 not 2 like it usually does.  I looked up at the board at the front of the bus and saw the fare for 2 was already 730, when the fare for the entire trip to Sapporo is 770. I don’t read kanji but I can recognize the kanji for Sapporo. It begins with a character that looks like a treble fish hook.  There was no fish hook on the sign at the front of the bus.  My first thought was “taihen desu, I’ve gotten on the wrong bus!” The only thing I could understand from the bus driver’s announcement was kosokudoro (highway).  We were on the highway, but I couldn’t tell if we were going toward Sapporo or away. The windows on the bus were all fogged over, so I couldn’t see out to see if I recognized any landmarks or signs.  To make a long story shorter, I did get to Sapporo.  The bus I usually take goes between my town and Sapporo.  The bus I was on this week was a once a day bus that originated in another town, but still stopped in my town and in Sapporo. I’m glad I didn’t end up elsewhere.


After Japanese class, I met my friend Miwako for lunch and we went to a Gruel Restaurant.  I’m not entirely sure of what gruel is, but I think it is something like porridge – you know three bears and Goldilocks. There were different kinds of gruel on the menu and different choices in the lunch set menu. 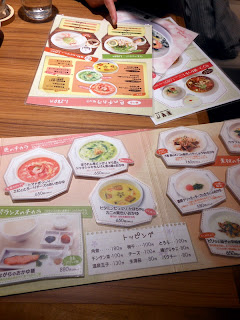 There were three gruel choices without meat – spinach and bean, shrimp and tomato, and my choice, pumpkin with crab.  Pumpkin in Japan is more like butternut squash than orange pumpkin in the US.  The gruel was delicious and I chose a shrimp and squid side and mango custard for dessert. I'm not sure what Miwako ate, but I think it was something with meat. 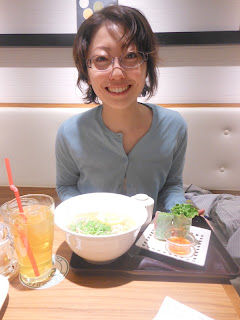 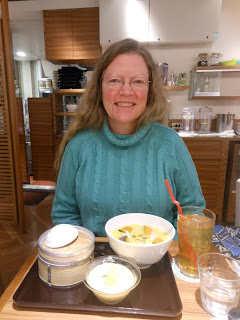 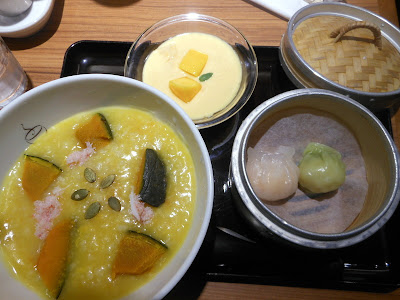 I am enjoying my afternoon children’s English classes.  I have eight 10 year olds in one class and four 5 year olds in another.  The 5 year olds are quite entertaining and surprise me with how much they know.  The sock boy from last time came in with his shirt up around his neck.  I asked him to pull it down and he did -- for about 30 seconds, then pulled it up again.  I didn’t say any more about the shirt, figuring he would pull it down when he got cold.  I was right, about ½ an hour later he pulled it down.  The three hours I was there flew by and the bus ride home was not as eventful at the morning.
Posted by Pamela at 4:00 AM