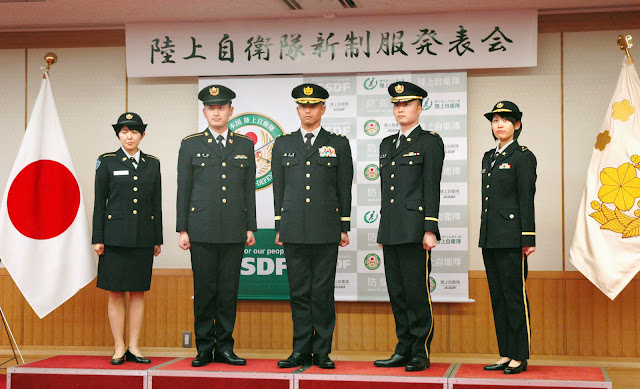 As of April 1st, the members of the Ground Self-Defence Force will have new uniforms.  This is the first design change since 1991. About 150,000 GSDF members will wear the new uniforms at a cost of about 33 billion yen.  I don't know what the old uniforms looked like, but these look very smart.

In Japan, many (most?) people wear uniforms, from school children to adult workers to martial arts participants. Even people who wear suits have a sort of uniform because they are all plain black or navy suits, nothing bright or flashy.  Where I work, they wear a company jacket/shirt over their regular clothes.  I think it identifies everyone as team, no matter what their jobs are.  The only uniform I can remember wearing is my girl scout uniform.  I never had a job that required wearing a uniform.

What about where you live?  Are uniforms the norm?

They do look very smart. Here the military have uniforms, the police, customs/immigration, ambulance officers, people have work shirts that identify where they work, but are casual clothes.

In senior highschool there was a discussion about introducing a uniform of sorts. The result was a collage sweatshirt with an emblem one student had designed and had been approved by others. Unfortunately there were so many requests for colour variations I think the shirts were in five different colours with the emblem in either black or white. Then came the request for a T-shirt for summer. Wearing the 'uniform' was not compulsory so in the end it did not look like a unified uniform at all. Pointless in my opinion!

Hi Pamela i agree with you that they all look very smart,i had to wear a uniform when i was at high school ,but havent had too at the places that i have worked in xx

Hi Pamela, I haven’t had to wear a uniform since my schooldays ..... although here in England people who work in offices often look as if they are wearing uniforms as so many of them wear black clothing/black suits for smartness!
Smiles,
Barbara xx

I like the Japanese tendency for 'dress up.' Uniforms are a statement of unity aren't they?
Or a kind of 'fantasy.' My grandchildren enjoy dressing up and play acting.
And I have my own uniform of colorful scarves I wear, maybe signaling my love
of color, variety and texture to others of like mind?
That's a fun topic isn't it?

I'm kind of torn about uniforms. Of course they are good for military or police, but, for example, we don't have school uniforms in Germany, and I'm not sure if it would be better to have them. One the one hand, it takes away from your ability to express yourself, but then, especially with kids, it would probable help a lot with bulling focusing on fashion choices...I'm just not sure.