Japan is a toilet mystery.  There are high tech toilets that do everything but wash the dishes. 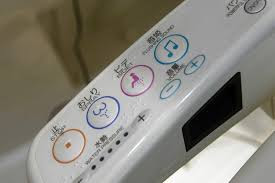 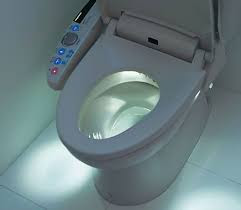 Then there are the traditional squat toilets. 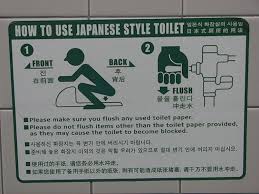 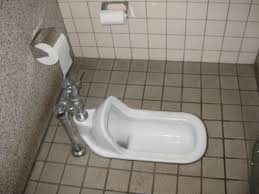 The Japanese government has been promoting the modernization of the squat toilets in public places before the 2020 Olympics when about 40 million travelers are expected to come to Japan.  Many foreigners are reluctant to use Japanese squat toilets.  Japan's major tourists spots have around 4,000 public toilets and about 42% are the squat type. The problem is that it costs several million yen to renovate a toilet building.

What do you think about toilets?  Do you mind using the squat toilets or do you prefer western toilets? Do you know what all the buttons on the high tech toilets do?

Mind boggles, LOL! At least there are toilets, which is more then can be said about some countries...
xx

Looks like the high tech toilets wash your bottom while playing you music!! Squat toilets are ok when you are young but not so good as you get older and your balance and knees are not so good!! I had to use squat toilets in Morocco years ago, I would bet the toilets in Japan are kept much cleaner.

hi Pamela no i wouldnt use the squat toilets,too hard to get back up ,i have no idea what the buttons are for,lol xx

Pam: I have to giggle, when Mike lived in Japan in late 60s early 70s he had a hole in the floor to squat over, he went into a store to buy the tabs that needed to be dropped into the toilet to stop any smell from coming up to his apartment, he asked for benjo stinko tabs the girls laughed he told them his toilet was drunk.
They thought this was hilarious, so do I.

I remember using the squat toilets years ago; some 40 years later, my knees might refuse! All the bending and kneeling must make the Japanese a very flexible group of people. Just wondering, by the way, how do you plan your little trips to cute countryside locations? Do you go to a regional tourist office or an internet site? Would love to visit myself but, it seems multi trains, buses, etc are required? Specifically, I would like to see jizo, wasabi farms and the Ghibli Museum & country pottery towns. Sigh.

I used squat toilets in France. Not so bad once you got used to it.

Li. You are a no-reply so I can't send an email to you. I hope you come back to read this. I use hyperdia.com to plan my train trips. You just put in your start and ending stations and time you want to start or arrive. It's great! Then I use google maps to see how far something is from the train station. Usually I can walk because everything is so convenient. Busses are a little more difficult to figure out. I've used the subway in Tokyo, Nagoya, and Sapporo. Information is available on the internet in English and signs are in many languages at the stations. If you send me and email (my address is on the profile page), I can tell you more about how to plan.

I have encountered the squat toilets. I think they are rare in Tokyo, where most tourists are likely to be for the Olympics. Maybe there are still a few in some of the older subway stations. I don't really mind them myself. They are clean, like nearly everything else in Japan, and that is most important to me.

The modern toilets, however, need clearly posted instructions sometimes. I remember a public toilet in a Kinokuniya bookstore that had very large hand printed signs in English - pointing out the flush button and also indicating that a large red button was NOT for flushing. For those of us from North America, the big obvious button would seem to the one for flushing, but sometimes it is not. The flush buttons are often somewhat discrete, interestingly. The big red button on the bookstore's toilet was to call in case of emergency. I can only guess how they figured out that foreign tourists did not understand that!

I personally hate squat toilets (have totally managed to hit my clothes, yick...), but I know my mom likes them for sanitary purposes. I also find it difficult to relax enough while straining my leg muscles squatting, makes it a much less pleasant experience. :P

I think I could cope with all the buttons on the hi-tech version. I have a Toto Washlet on my own toilet, although it doesn't have lights or music.

Squat toilets I'm not so good with. My knees just can't cope, and I really don't know how to use them safely without taking off half my clothes (to keep them from getting in the way). I avoided them as much as possible in India, although they are the predominant type there.

My goodness, talk about two ends of the scale! Squat ones are fine unless, like me, you have bad knees!

I have never seen a squat toilet. I didn't even know there was such a thing. I certainly would not be able to use one unless it had bars to help me rise back to standing. I have seen ads for the new ultra toilets and think people that buy them just have too much money.
xx, Carol

I prefer the western toilet myself, but the squat toilet (which my mom calls the 'arabic toilet') is very common in my country. Also, how different is it from squatting when you go camping? To have a country spend all that money to convert their toilets for tourists is a real waste.
By the way, I've tried those space toilets in Korea and they are awesome

Hi Pamela, now that is a topic for discussion isn't it?
Supposedly squatting is the more natural method of elimination,
and regular squatting keeps those leg muscles in use.
I get out hiking now and then so squatting is not foreign to me,
at times it's a necessity.

The good thing with squat toilets is that your bum doesn't come in contact with the seat. However, you might have to pull up your trouser legs so they don't get drag on the floor.
I agree with Radhka, it is great that you can so easily find a toilet in Japan. In Sweden, there are few public toilets, and in department stores and stations, if you find one, you will have to pay. Sometimes with coins, sometimes with your smart phone, sometimes at cinemas and museums, you need a pin code printed on the ticket to be able to use the loo. Toilets are often vandalized and dirty, with paper and puddles on the floor. That is most unusual in Japan.
Often the most challenging thing is to find the flush button!

I have only used a squat toilet once or twice, on my trip to Melbourne when I was switching planes in Dubai. About 2/3rds of the toilets there seem to be of the squat type. I don't really mind using them, but given the chance I will prefer the western type - probably just because that's what I'm used to!