What is a Tanuki?

Before coming to Japan I hadn't even heard of the tanuki. The first time I saw a real one was in 2013, when we visited the Asahiyama Zoo in Hokkaido. 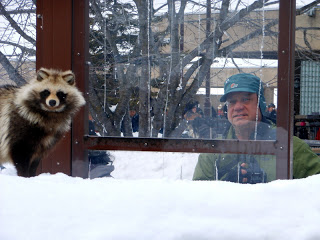 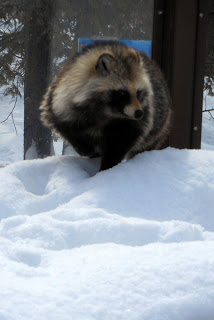 They look like raccoons and are sometimes called raccoon dogs. In fact, they aren't even related to raccoons. They are in the animal family related to wolves, foxes, and domestic dogs. The common raccoon found in the US is in the animal family with weasels, badgers, and otters.  The similar appearance might be convergent evolution, where different species evolve to occupy the same ecological niche.

They are popular in Japanese folklore and are symbols of prosperity and ecomonic growth. The first known text reference was in 720 AD in a history book called "Nihon Shoki".  They are recurring figures in folk tales throughout Japanese history, appearing as a trickster or a sign of good luck. In popular culture, they can be found in Nintendo video games and Studio Ghibli films.

I've never seen a real one outside of the zoo, but apparently, you need to watch out for them in some areas. Tanuki statues are seen everywhere though. 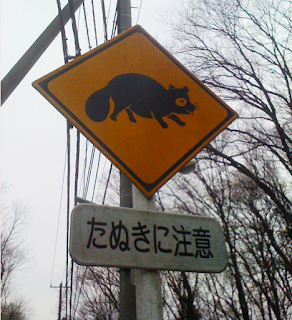 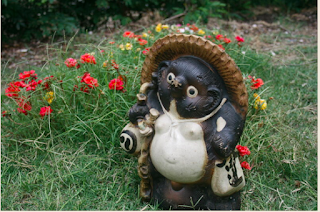 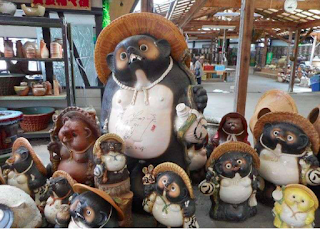 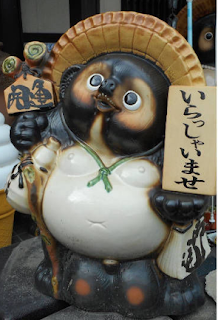 Have you seen or heard of tanukis? What do you think - cute or strange?

Email ThisBlogThis!Share to TwitterShare to FacebookShare to Pinterest
Labels: Tanuki

That's amazing! I've seen figurines like your last photos, but I didn't realise they were based on a real animal. They are actually quite cute in real life!

So cute! But I also think raccoons are really cute, and I *love* wolves and foxes, so they're an awesome combo!!

That's a tanuki? I didn't know the word but Rick has a bank that is like one of the images you showed that friends from Otsu gave him. I think it may be their prefecture's animal or symbol. We have a keychain like it too! The actual creature is much cuter than the ceramic!

No I haven’t heard of them, but they look quite cuddly.

I have never seen a live one, only the ceramic ones. Both are cute!

We've seen those road signs while driving, and we've seen those ceramic figures, but never put them together. We've wondered what kind of animal we were to look out for, now we know - a tanuki.
I learn quite a bit on your blog. Thanks.

I have never heard of them before, they are cute looking.

I wish I had known there were zoos with tanukis when we were there! Definitely adding seeing a real live tanuki to my bucket list now! I think they are so cute! The first time I'd heard of them was growing up playing Super Mario 3!

I've heard of them from popular culture and have to say - real animal - cute, pop culture ones - cute, traditional statues/drawings - mostly creepy!