I love to see live shows and when I go to London, I usually try to see a matinee and an evening performance every day.  This trip I was only in London a few days, but I was still able to see five shows – Jeeves and Wooster in Perfect Nonsense, The Woman in Black, The Commitments, Once, and Let It Be.


Jeeves and Wooster is a comedy based on the books of P. G. Wodehouse. I really enjoyed this play.  I listen to these audio books over and over and never tire of them.  Since coming home, I have discovered a British television series about Jeeves and Wooster on YouTube and have been watching episodes.  The actor who plays House (Hugh Laurie) plays the Bertie Wooster character in the tv series. Duke of York Theater


The Woman in Black was really scary. I don’t recommend seeing this play if you have a weak heart! Fortune Theater


The Commitments is a musical based on Roddy Doyle’s best selling novel about a musical group in Ireland.  I hadn’t heard of it before and was surprised to find out there is a book and a movie already out there.  It featured the music  of Otis Redding, Jimmy Ruffin, Wilson Pickett, The Supremes, Marvin Gay, Aretha Franklin and others. Palace Theater 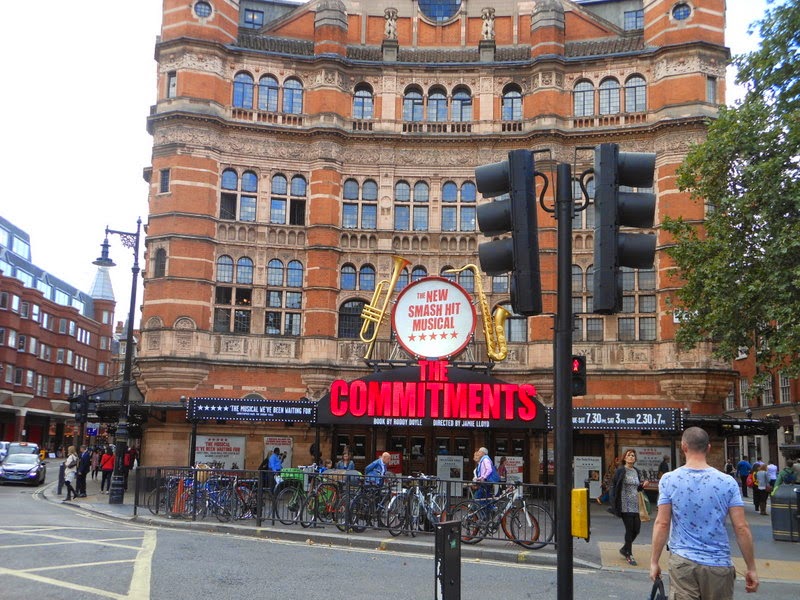 Once is also set in Ireland, and is a musical based on the film of the same name.  It tells the story of an Irish busker and a young Czech girl who meet through a shared love of music. It was funny and touching. The stage is a pub and before the show and during the intermission, people in the audience could buy drinks on stage. Phoenix Theater


My favorite of the plays I saw this trip was Let It Be, about the Beatles.  The audience was encouraged to stand up and sing along with the musicians who played the Beatles.  I often listened to the Beatles in my younger days and I knew all the words to all the songs.  It was very nostalgic. Garrick Theater


Miss Saigon is again playing in London, but I didn’t choose to see it this trip.  I saw it on my very first trip to London in January of 1991. I liked it when I saw it, but it is so dark and haunting that I couldn’t see it again.

I love live shows, Pamela :) The hubby and I try yo catch a show at least once a month, normally a comedy though as hubby doesn't quite enjoy musicals!

I am so glad you got a lot of entertainment out of your stay in London. I used to go to the Open AIr Theatre in Regent's Park. It is always so nice to see the evening darkening and the stage setting changing with the natural light. Many people have a picnic basket, a bottle of champagne or a flask of cocoa to enjoy during the performance. Once we all sat under umbrellas... that was a memorial night, too.