Today is Hina Matsuri (also known as Girl's Day) in Japan. This display is in the lobby of Takamatsu hotel. 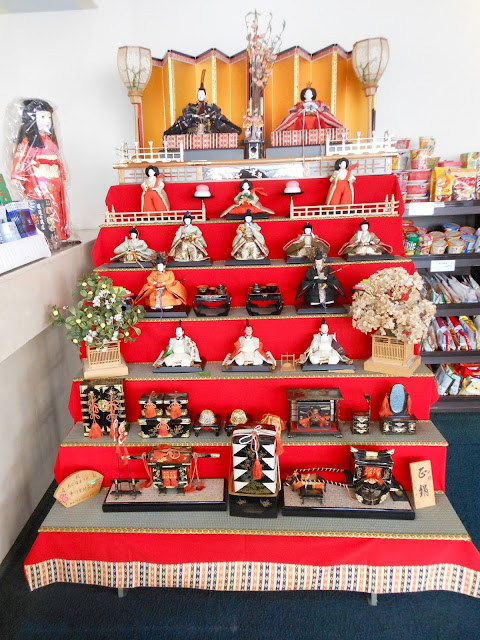 To celebrate girls growth and good health, dolls dressed in Heian period costumes are displayed on a tiered stand. These dolls represent the Emperor and Empress, their noble court ladies in waiting and ministers.
The custom of displaying dolls began during the Heian period (794 - 1195).
There is a certain order of the tiers of dolls. According to Wikipedia, the top tier hold the Emperor and Emperess dolls, usually in front of a gold folding screen and placed beside green Japanese trees. The traditional arrangement had the male on the right, while modern arrangements had him on the left (from the viewer's perspective).

This is so interesting. Thank you for sharing. I love the Girls Day tradition. This is a beautiful display

thx for sharing. over the past summer, enjoyed seeing some friendship dolls in museums and saw a similar display --

That is so interesting, Pamela. I love all the intricacies of traditional Japanese culture.

I've been seeing these on Instagram. It's great to get an explanation on what it is.

What a beautiful display, thank you for the explanation.