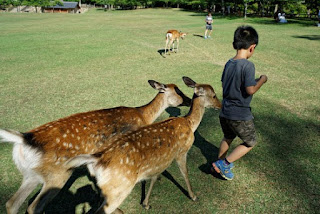 The more than 1,000 native deer (shika) in Nara Park in Nara Prefecture are considered to be messengers of the gods and a national treasure, so they are protected within the city limits due to their sacred connection to Nara's Kasuga Taisha Shrine.  Because of their protected status, they are allowed to roam freely throughout the park and the streets.  Special rice crackers are sold to feed the deer.

Every year hundreds of people are injured by the deer, and the number of injuries are increasing each year. Last year eight people suffered fractures, including hip fractures. Foreign tourists are among those injured, with five of the eight serious fractures last year affecting tourists visiting from abroad. In December of last year, the prefecture began giving out information booklets in several languages, to visitors with warnings not to irritate the deer.

When I visited in 2012, I witnessed some children crying because of aggressive deer, but I didn't see anyone get hurt. They look very cute, but you have to be careful! 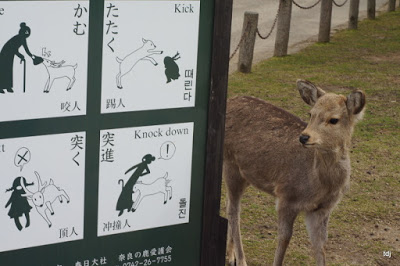 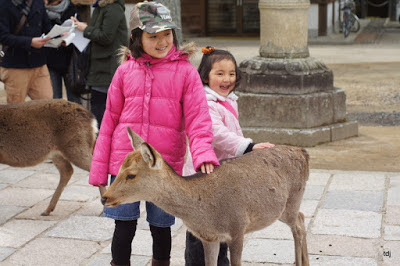 They do look cute, but I imagine they can be very strong especially around children when they are looking for their food.

I grew up not too far from Yosemite and other wildlife areas, and went there many times as a child. Visitors were cautioned not to go near any deer because they could cause serious injury. I have not been to Nara, but when I first saw pictures it was surprising to me that people could/would approach deer. In my mind, they are dangerous. I guess the deer seem domesticated to people in that setting, but they are still wild animals.

Oh and they seem soooo cute!!!!!! But definitely everyone has to be careful. Kisses, Pamela.

They are cute looking little deer, but I can imagine that they could easily knock over a small child or a frail older person. It could be difficult to avoid irritating the deer if they expect to be fed. If you have no food what happens?

Deer look lovely, but have to be approached with caution, if at all, as they could become agressive when expecting food.

When I last went to Nara, the deer caused traffic congestion. The public bus could not move because the animals were walking slowly in traffic. In the park, they can be aggressive, especially when people tease them.

When we visited Nara, most of the deer were pretty docile...as long as you weren't carrying any food! Some of the people were very rude to them, though - poor deer gods.