In Japan, Genghis Khan is a meat dish featuring mutton, that is especially popular in Hokkaido.  What?  Wasn't Genghis Khan the ruler of the Mongolian Empire during the late 12th and early 13th centuries? 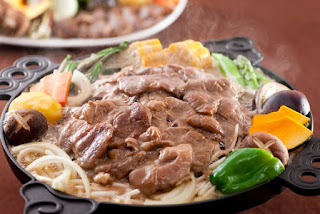 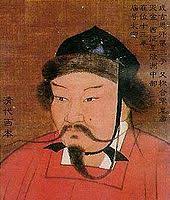 Haiying Yang, a Mongolian-born humanities professor at Shizuoka University claims giving this food the same name is disrespectful.  Yang told the Japanese language division of Newsweek, "Mongolian people feel the same way about Genghis Khan as Japanese people feel about the emperor of Japan.  He is a sacred figure whose name should not be used for a kind of food."

Most people probably don't know how the food came to have the same name as the Mongolian ruler.  Keiichi Takaishi, Japanese food historian, explains it started with Yoshiji Washizawa, a Japanese journalist born in 1883.  He spent time living and working in Beijing and while there he and a Japanese co-worker ate a mutton dish at a restaurant.  He remembered eating in in Mongolia also.  The two began referring to the dish as "Genghis Khan" and eventurally other Japanese people used the term and it spread back to Japan.  The Japanese-language pronunciation (and way of writing) are a little different.

What do you think? Is it disrepectful to use a centuries old ruler's name for a popular food?  Is it even the same name?  Can you think of any other food with the same name as a historical figure?

Personally I don't think it is disrespectful, but I can understand that others disagree.
In Sweden there is a very popular cake called Napoleon. I think it honours the emperor.

Every single time there is something on the History Channel about Genghis Khan my husband watches it. For some reason he loves stories about his life.

I don't think naming food after historical people is disrespectful, but I can understand why Asian people would think it is. It seems Asians hold a lot of things in high regard that Americans don't have the same feelings about.

It's pretty common here for certain restaurants to name dishes after sport figures, rock stars etc. For me, it's really easy for me to remember that Terry's favorite hamburger at a local restaurant is the Ryan Sandburger. You probably don't know who that baseball star is, lol.
xx, Carol

I think that's pretty common, not so disrespectful. Someone mentioned the Napoleon. Also General Tso's chicken (he may or may not have been real!) and you always hear about sandwiches in Hollywood and New York restaurants being named after stars. I think it's kind of nice.

I wonder what that professor thinks about Caesar Salad...or Béchamel Sauce, Bismarck Herrings, and a hundred different dishes named for famous people. I don't see anything disrespectful about it as long as the dish is delicious!