Be On The Lookout in Yokohama 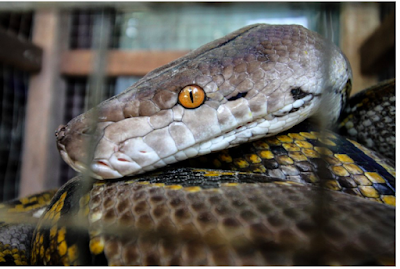 A three and a half meter, 13 kilogram, pet python escaped from a second floor apartment in Yokohama Thursday evening.  The owner notified the police about 9:30 pm when he returned home and his pet was missing. This species is considered one of the largest snakes in the world, and while not venomous, the python is able to constrict and suffocate its prey. The owners of these pets must get government permission to keep the reptiles. Police think the snake escaped through an open window to a mountain area behind the apartment building. Of course they would say that!

Yikes! Do you think big snakes like this should be allowed to be kept in apartments? I understand having a cat or a dog for a pet, but I don't get having a big snake. 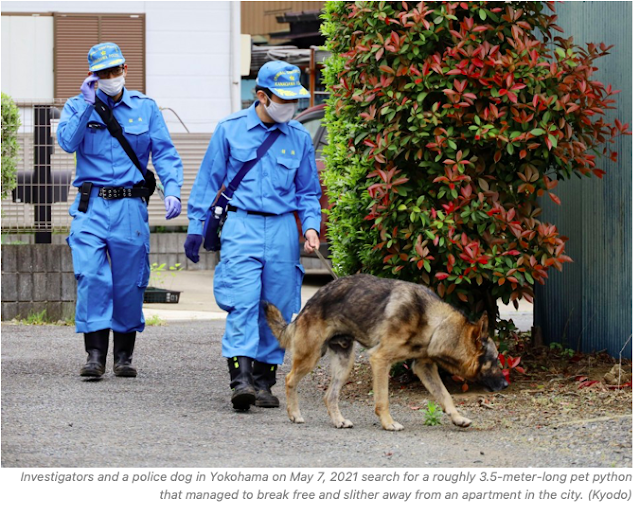 Pet snakes? Not on a bet!

The owner shouldn't have got permission for keeping the snake in the apartment. Definitely not!

Poor snake! He must be so scared and confused, having been locked up in a glass cage in a small apartment for a long time. And for what? For the pleasure of an egoistic man. Would YOU want to be kept in captivity like the? Of course he wanted to escape as soon as he had a chance, probably trying to return to his native country, family and friends.
Now for the owner, what a selfish person. Keeping the window open for ventilation, the cage unlocked and then going to work. Not thinking of all the trouble he is causing. All that police work, the search by volunteers not to mention the fright of all the local residents. I am sure there were neighbours who did not know they had a snake living next door. Did the owner of the apartment complex know, and given permission for such a resident?
A lot of people will have sleepless nights before the snake is found.
The answer to your question, in my opinion, is NO!

I don' think it is fair on the snake either, it is probably feasting on the neighbour hood cats now!!I remember seeing a python many years ago in a camping ground, it was just cruising through, was wild and not a pet and had a huge bump in its body....we heard later the neighbours cat was missing!

Eek! I wonder how you can even care for a snake that big properly in a small Japanese apartment?
Speaking of pets, I wouldn't let my cat or dog out of site while this one is one the loose...