The beginning of October I read about the Kumano Kodo and suggested to Ted that we take our holiday trip to this area.

Sacred Kumano
The ancient Kumano region is nestled in the verdant mountains of Wakayama Prefecture — the spiritual heartland of Japan.  This lush and rugged area has been considered the abode of the gods and worshipped for centuries.

Walk the spiritual Kumano Kodo pilgrimage route, soak and relax in the healing waters of an isolated Onsen, dine on delicious local cuisine, interact with the friendly locals; What kind of adventures are waiting for you?

He rejected the idea before I could finish telling him about it, so I put it to the back of my mind and said no more about it at the time.  The more I thought about it though, the more I wanted to go.
At the beginning of November, I thought it was a sign that I was meant to go when I received a sale email from  LCC Peach Airlines offering an incredibly cheap flight.  It took a few days of research, but I found inexpensive Japanese accommodations to stay in along the way, which had supper, breakfast, and a box lunch for the trail all for one low price. I did have to share a bathroom and sleep on the floor,  but it was worth it.  By mid-November, I had my travel plans in place and spent the next month before the trip reading and learning about the area.

What a great trip I had!  I walked the trails, carrying my pack.  I relaxed in the onsens.  I saw some incredible views. Some parts of the trip were challenging for me - the walks were steep and long, and I had to rely on my own Japanese skills because I was alone.  This trip was just what I needed.

(Ted went to Okinawa over the holidays, again).

In 2004, the Scared Sites and Pilgrimage Routes in the Kii Mountain Range became a UNESCO World Heritage Site. The sacred site consists of three shrines (Kumano Hongu Taisha, Kumano Hayatame Taisha, and Kumano Nachi Taisha) and two temples (Nachisan Seiganto-ji and Fudarakusan-ji). Originally, each of the three Shinto shrines had its own distinctive form of nature worship, but each embraced the main deities of the other two and enshrined all three deities designating them as Japanese incarnations of Buddha.

DAY 1 - Mostly travel
I usually travel light, but this trip I traveled especially light because I knew I would be carrying everything the whole trip. My backpack (plane carry on) was about 10 kg. I had warm clothes just in case I was caught in a storm or got lost, which made it a little heavier than I would have had if the weather were warmer.

I walked from home to the bus stop and took the bus to Sapporo, then took the train to New Chitose Airport, and flew to Kansai.  So far so good!  At the airport I bought a train ticket to Kii-Tanabe that required one train change.  Wouldn't you know it? I got on the wrong train at the change! I didn't panic, I got off the train after realizing I was on the wrong train and explained to the train station clerk (in Japanese) what I had done.  She exchanged my ticket and told me which platform to go to to get on a train to my intended destination.

So, I arrived at my first night's lodging a little late, but it was okay.  I stayed at the Hotel Hanaya, very close to the train station, my first and last nights.  It was the only place I stayed where I had an ensuite bath and toilet. 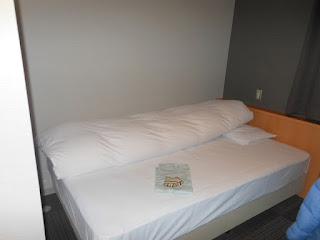 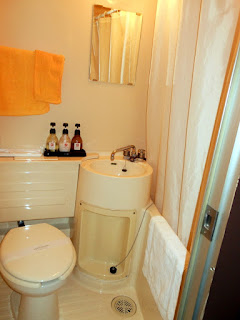 I slept well and was ready to start my adventure the next morning.  I will continue day 2 of this story in a couple of days.

Wow! Looks like you had a great time. Look forward to reading about your adventures!

Pamela, you are amazing! I look forward to hearing more about your adventures.

Well done you!! Sounds wonderful...looking forward to reading about your travels.

You are brave! This will be an interesting read!!