May third is known as Gomi no Hi or Garbage Day.  Why, you ask? Because the Japanese word for Garbage is Gomi -- 5 is Go and 3 is Mi! 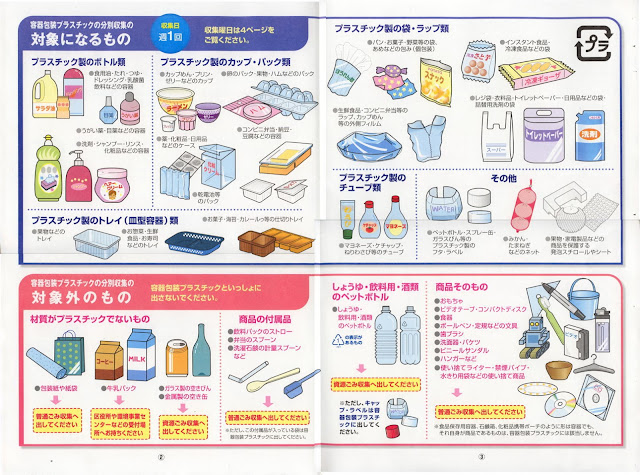 Remember to separate everything properly.

Always something fun to learn when I visit here Pam. We are very good at recycling things.

I like that the Japanese use 'manga' or pretty drawings for telling people what and how to do things.

Yes, garbage day! I always know when it's garbage day because I can hear the big garbage truck being loaded with dumpster trash by a smaller truck, and several dumpsters get unloaded too. They choose to do that right below us. It's quite a process.
I've probably told you more than you want to know, but where would we be without garbage service?

We do a lot of garbage seperation in Germany! It was interesting to see how different the seperation was organized in our different apartments in Japan. Tokyo was terribly, seperating just combustibles and things that won't burn felt really strange! Still better than putting everything in one can when we stayed in the US, though. I wonder why more countries won't make an effort?

That looks like a very complex system. We have two bins - one for rubbish, one for recyclables. The recycling is sorted by big machines at the waste plant.

Interesting. Do you have to take your trash to a local center to dispose of it? What does Japan DO with their trash. Do they have landfills as we do in the USA? We do recycle items and used to send it all to China. Now China doesn't want it. Such a dilemma.
xx, Carol