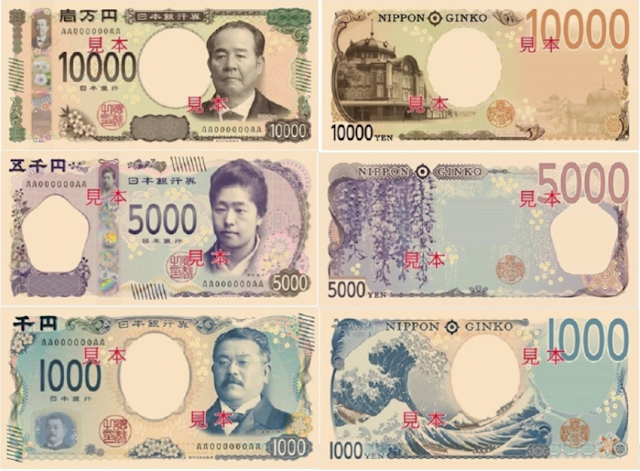 In 2024, Japan plans to introduce redesigned banknotes for the 1000, 5000, and 10,000 yen notes.  (Japan also has a 2000 yen note that is not used much and that will not be redesigned.) This will be the first redesign since 2004 and will have new anti-counterfitting protections.

The new banknotes will feature industrialist Eichi Shibusawa (1840 - 1931), educator Umeko Tsuda (1864 - 1929), and physician and bacteriologogist Shibasaburo Kitasato (1859 - 1931).  These three people were chosen because they are well known through history textbooks. Shibusawa is known as the father of Japanese capitalism.  He founded the first modern bank in Japan, currently known as Mizuho Bank. Tsuda was a Christian and pioneer in education for women.  She established the Tsuda University in Tokyo. Kitasato helped discover a method to prevent tetanus and diphtheria and, in the same year as Alexanter Yersin of France, discovered the infectious agent responsible for the bubonic plague.

The reverse sides will feature the red-brick Tokyo Station building (originally build in 1914), wisteria flowers, and "The Great Wave off Kanagawa" from the "Thirty-six views of Mount Fuji" series by ukiyo-e artist Katsushika Hokusai (1760 - 1849). The 5000 and 10,000 yen bills will feature holograms to strengthen security.

Who or what is featured on the bank notes/bills in your country?

Pamela: That is very interesting, fraud is rampant in the world today, it is a shame.

I think Japan change notes more often than Sweden.
Recently these notes were introduced, depicting an author of children's books, a composer, a film star, a film director, an opera singer and the UN Secretary General
You can read more here:
https://www.riksbank.se/en-gb/payments--cash/notes--coins/notes/valid-banknotes/

The notes are beautiful. As you know, we never change ours (although there was talk about booting off Andrew Jackson in favor of Harriet Tubman on the twenty, which I think is a fine idea that will probably never happen.)

I think the new bank notes are beautiful, especially the backs of the 5000 and 10.000 yen! Euro bank notes feature architectural styles through the epochs. We had a redesign going on over the past couple years (with one denomination being replaced at a time), but only for security reasons, the design state the same.