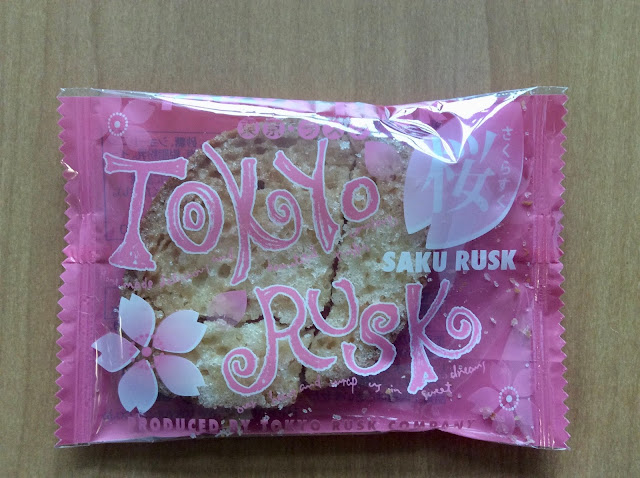 One of my students told me about Rusk, but I didn't know what it was. He brought me this delicious Sakura rusk, made by Tokyo Rusk Company.  Apparently it is a Japanese sweet snack, sort of like biscotti, but not really. After all this time in Japan, I hadn't seen or tried it before!

So, tell me, do you know of this delicious treat, and have you tried it?

Email ThisBlogThis!Share to TwitterShare to FacebookShare to Pinterest
Labels: Rusk

New to me, I hope it is enjoyable.

It looks like a good snack and the packaging is attractive.

I'd heard of rusk as a teething biscuit but this looks quite different!

Looks good, will look out for them next time I am in Japan.

Surely you know what a rusk is?!

Here is a copy from the dictionary:
rusk | rʌsk |
noun mainly British
a light, dry biscuit or piece of twice-baked bread, especially one prepared for use as baby food.
• [mass noun] twice-baked bread used in foods such as sausages, and formerly as rations at sea.
ORIGIN
late 16th century: from Spanish or Portuguese rosca ‘twist, coil, roll of bread’, of unknown ultimate origin.

In Sweden it is one of the most common afternoon snacks, and often made at home from bread that has become stale - you simply dry sliced a piece of bread in the oven, and then eat it with butter and jam.

Here is a link to the most famous rusk company in Japan:
http://www.gateaufesta-harada.com

I guess Queenie told it all, lol.
Interesting that you have not seen it before though.
xx, Carol

Rusk, or pronounced "rasuku" is quite popular in this country. Why don't you find out others?

To me rusk is something you give babies - definitely not sweet! xx

I'm aware of several types of rusks, but not sweet Japanese ones! Once it is safe to go into the city again, I will have to look in the Asian groceries to see if they have these ones.

Rusk to me is something you give babies when they are teething!!

I didn't know the term rusk, but the dictionary tells me it's 'Zwieback' in German, and I did know that! More as a 'eat this when your stomach is upset' type of thing, though, not a sweet treat.