Do you think Japanese people spend more on their dogs or their cats? A survey by Japanese pet insurance company Anicom Insurance revealed that pet owners spent more than twice as much on dogs as on cats!  The internet survey among the company's policy holders received 3,532 responses. Average annual spending on dogs was 347,104 yen, with only(?) 164,835 yen being spent on cats annually.

The biggest expense for both was food and treats, amounting to 64,745 yen for dogs and 42,925 yen for cats a year. According to the chart below, over 10,000 yen a year is spent on dogs' clothing.  That might sound strange if you've never seen Japanese dogs.  They have more clothes than I do! Owners reported spending more on their pets than themselves on grooming and medical fees.  One answer was "I only get my hair cut once every two or three months but the dog goes for a trim every month."

Do you have a pet? Does this line up with how much you spend a year on your cat or dog? Do you think Japanese pets are pampered and this is too much?  I'm curious and want to know what you think. 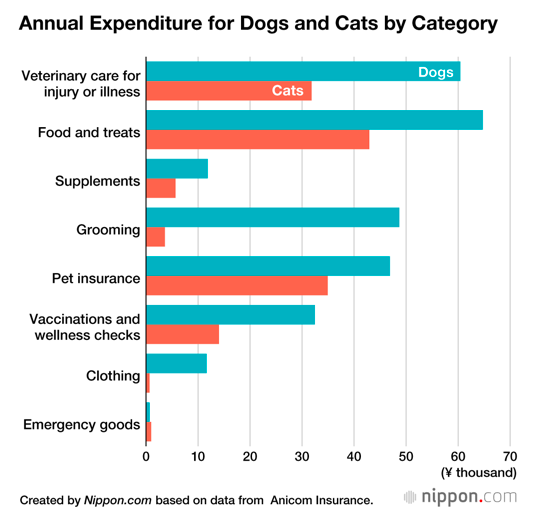 Email ThisBlogThis!Share to TwitterShare to FacebookShare to Pinterest
Labels: Pets

This makes loads of sense to me. Cats are very low maintenance. They don't require grooming (unless they are more exotic, like Persian, for example, that may get matted, but that's pretty much not a regular expense if well brushed.) They tend to be smaller (though dogs can be all sizes) and eat less. The older the pet, the more likely for insurance or more vet visits and most cats aren't into wardrobe! (I know. I've tried. About the closest you get is a cute collar and maybe -- for a quick photo -- a hat! The biggest cat expenses are 1) food 2) litter. In October I bought Lizzie enough food and litter for six months and it came to about $275, plus a $140 vet visit (my visits are more expensive because my vet comes to my home; most would be much less). The only other expense I might have outside of pandemic would be for someone to come in to feed her if I traveled and that would be $15/day, which is less than boarding ($25/day). Of course, when an animal ages or gets ill the vet costs go up significantly.

I've rattled too long but this is interesting!

I think we spend about 50000 yen annually on our cat. This covers food, litter, visits to the vet. Should I include electricity, too, as she loves the floor heating on... She is a rescued cat, and we have been willing to care for her as she would have died without us stepping in. We see the cost for her keep as a kind of charity.
We would never 'pamper' her with pet food birthday cakes, clothing or a cat buggy. I think it is more common for the Japanese to spoil dogs than cats in such ways, but even if I had a dog I would not pamper it. The wellbeing of the pet is the most important. It is not a toy.

Personally I don't like to see dogs dressed up, but I know lots of people spend a lot of money doing just that. Our dog died two years ago, his major cost was vet bills and food, he didn't like toys and was happy to sleep beside his bed never on it! He was brushed and didn't go to a groomers, we did it ourselves. I think some dogs become surrogate children.

My dogs don't cost that much! They have food and annual vaccinations, but no grooming, supplements, insurance, or clothes. One had a few vet visits recently when she got a grass seed stuck in her eye, but apart from that there has been no injury or illness expenses for either of them in 6 and 7 years. They do have to be registered with the local council, which costs about $40 each per year.

I haven't owned pets in a long time, but I know it's not cheap. Especially (good) food and vet costs can add up quickly. I don't think I'd spend a lot on grooming and clothing, though!