The big snake I wrote about last week is still missing.  The police and fire departments used an infrared camera to scan the building and checked sewers and crevices with fiber optic cameras. The police gave up on the search Friday, but fear not, YouTubers are continuing the search for the giant snake. You can read more about the brave YouTubers here. 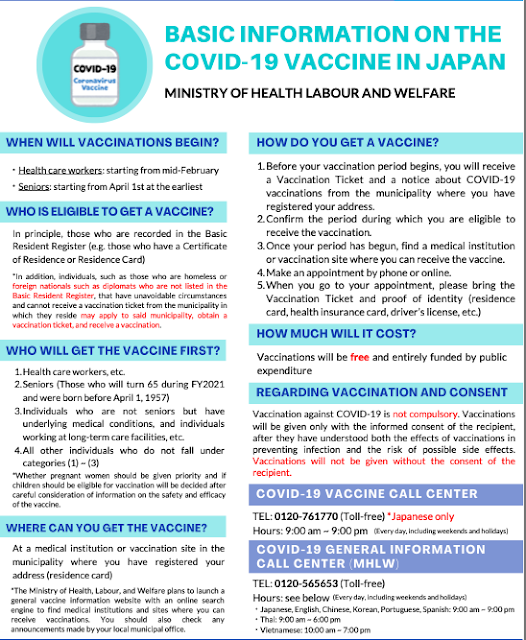 The vaccine roll out that I first wrote about here is slow, but moving ahead.  In my area, residents who are 85 and older are receiving their vaccine tickets by mail and are able to make appointments for the first shot, which will begin later in May. Appointments can be made online or by phone.  Guess which method most people over 85 are using? This is the message on the city website.

電話のかけ間違えが多発しています。
新型コロナワクチンコールセンターへおかけの際は、電話番号をよく確認してから発信していただきますようお願いします。
translated:
There are many mistakes in calling.
When calling the new Corona Vaccine Call Center, please check the phone number carefully before sending it.

I've heard the vaccine tickets will be sent out in five year increments as each age group is nearly finished being vaccinated. In Japan, only doctors and nurses under the supervision of doctors can give vaccines, not pharmacists or trained volunteers as in other countries.  The government is trying to enlist dentists and retired doctors to help with the vaccinations.

There have been earthquakes in other areas of Japan, but none recently around where I live.

Officially, they are still scheduled to happen beginning in late July this year.

Currently, Tokyo and seven other prefectures are under a state of emergency and several other prefectures are under a quasi-state of emergency. I don't know what the quasi-soe is about.  Even the SOE isn't a lock down or anything harsh.  It's more like the government asking people to stay home if they can and to wash their hands. Restaurants are asked to close earlier and not to sell alcohol, but... People in Japan are just supposed to do the right thing without being punished if they don't.   Really.

A petition signed by over 350,000 people, calling for the Olympics to be canceled was submitted Friday. It was previously decided that no overseas spectators will be allowed and the decision on whether spectators from Japan are allowed will be made in June. Olympic sponsor Toyota claims to be "conflicted" about whether the games should be held. Time will tell, but it seems like they will be held.

My town usually has quite a few summer festivals and fireworks.  Last year they were all canceled.  I can't find any information online so I don't know if they are canceled or will be canceled again this year. Last February, a quilt festival was scheduled in Shizuoka City but it was canceled at the very last minute.  It was rescheduled for this month and is being held. Many of my friends and students have contacted me about it.  I enjoy going to quilt shows, but I don't feel safe going this time. Some people might say I am overly cautious because there aren't so many confirmed cases where I live. I think there will be other shows and festivals in the future.  I can't control how close people get to me or if they wear their masks properly or if they are infected but asymptomatic.   For now I am staying home.

Well, I guess that's all for now.

Hi Pamela: This is a very interesting post, I would be so afraid of the snake, I will touch them but only if a trainer or owner have them under control.
I am not getting the vaccine, two of our friends have been put in the hospital and today a friend from church his son in in the hospital now and not in good condition, I am very afraid of the shot.
I am happy you have no quakes, they are so scary, I know Jap[an has many.
I am hoping the summer Olympics happen even without an audience.
We are having our summer festivals this year something we all need to help get back to normal.
Have a lovely day

I enjoyed reading your updates of news. I am terrified of snakes, don’t think I would be comfortable in Yokohama. We are having our covid vac this morning.

I hope that snake is found 🙄 the athletes from Aus are having their covid shots now I understand before they head off for Japan, not sure it is such a good idea. We are booked for our first shot on Tuesday. I think you are very wise only going places you feel happy going.

Thanks for all the updates!

I think you are wise to stay away from gatherings. From what I can see online, case numbers in Japan are climbing. Stay safe!

Like you, I will continue to 'stay home' and not mix with others more than absolutely necessary.
I have got my vaccination ticket and can call/log on for an appointment starting June 14. When I will eventually be vaccinated I do not know.
I hope the snake is well but that it will be found soon so that residents nearby can relax.

Given your vaccine situation and the rate of Covid, I wouldn't go to the quilt show, either, sadly. It does sound a mess. I know they have invested so much in the Olympics but the price they pay may be higher if there is a break out.

As for the snake -- that would have me going nuts!

Thanks for all the updates! I'm curious to see how things will develop, especially on the Olympics and vaccinations fronts.