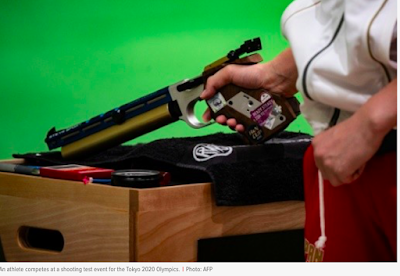 Japan has some of the world's strictest gun control laws. As a result, the number of gun deaths each year in this country of about 126 million people are in the single figures.

I didn't realize how strict the laws were until I read about the 2020/21 Tokyo Olympics shooting events. Coaches are not allowed to touch the firearms, (not to mention fire one), only the participants. There are also strict limits on ammunition. Japan has a limit of 800 rounds of ammunition per shooter at any one time.  This is less than other competitions and previous Olympics. There are designated contractors who are allowed to ship the ammunition into Japan specifically for the Olympic Games. A 16 page guide was created for teams to warn about Japan's regulations.

Wikipedia has compiled a list of gun laws by country if you are interested. This is what it says about Japan.

Japan
The weapons law of Japan begins by stating "No one shall possess a firearm or firearms or a sword or swords", and very few exceptions are allowed. Citizens are permitted to possess firearms for hunting and sport shooting, but only after submitting to a lengthy licensing procedure. As part of the procedure, a shooting-range test must be passed with a "mark of at least 95%". A mental-health evaluation taking place at a hospital, and a thorough background check where one's family and friends are interviewed, are also part of the procedure.
A gun license expires after three years, at which time license tests must be repeated. After ten years of shotgun ownership, a license-holder may apply to obtain a rifle.

Japan has been described as the country with "perhaps the first ever gun buyback initiative" in 1685, and is the first nation to have imposed gun laws in the world; as such, gun ownership is very rare: 0.6 guns per 100 people in 2007.  In 2014, Japan saw 6 gun deaths.

Each prefecture in the country can operate a total of three gun shops. New cartridges can only be purchased after turning in expended cartridges. In turn, new magazines can be bought only by trading in old ones. If a gun owner dies, their relatives must surrender their firearms. Off-duty police are not allowed to carry weapons, and arrests are generally made without firearms; instead, police are expected to be proficient in judo.

Here is one Wikipedia illustration about handgun possession. 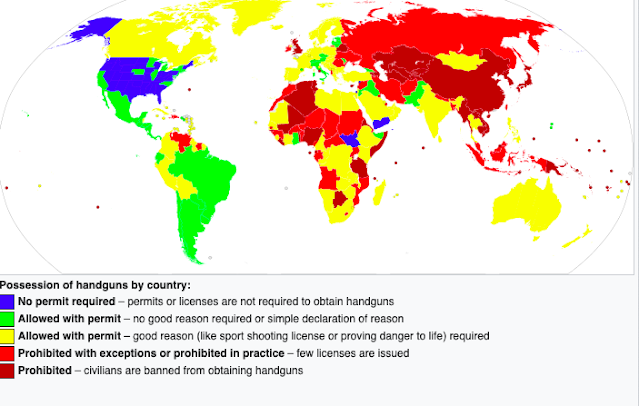 Check out this bit of information about guns/mass shootings in the USA, source - The Guardian. Terrifying, isn't it? I'm happy to live in Japan, a country with such strict gun laws.

I think Japan's gun laws are wonderful, we need those kind of laws all over the world. That article was terrifying, I didn't know there were so many shootings in one month. The gun lobby seems to be super strong in the US and then of course there is the right to bear arms, which seems to be taken extremely seriously.

I learned very early in the days of the internet to never mention guns! That was because most of the people I was interacting with were American, and we were never going to understand each other. Let's just say I prefer Japan's attitude to firearms.

I am wondering if there is another reason why gun culture is so widespread in the States and rare in Japan. Go back a bit in history - USA was 'The Wild West' with cowboys, and Japan the country of samurai.
We do not have a lot of gun related crimes here in Japan, nor is the craze for explosives that has recently shaken up Swedish society reached Japan, but the humble knife is an easy to obtain weapon and often used in deadly crimes.

Boy, we could take a lot of lessons from them on this. So much gun crime in the US -- when you have to dance through the hoops you do in Japan, I would think that would make gun crime much less.

I knew Japan's gun laws were strict, but didn't know they were that strict - or that they also extended to swords! Isn't there quite a tradition of sword forging and fighting in Japan?