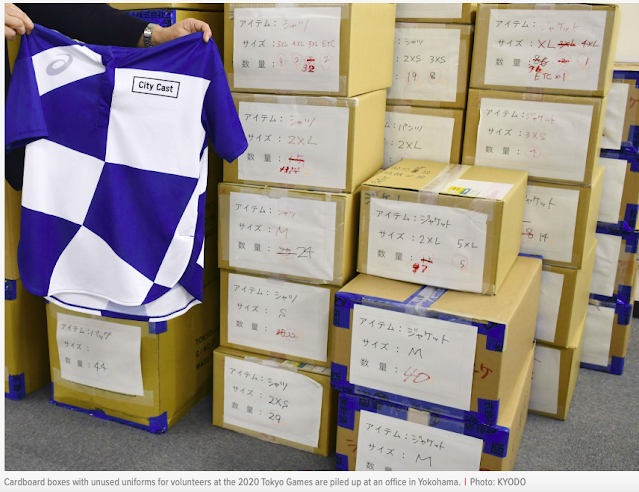 After a year's postponement and the pandemic causing the games to be closed to spectators, many volunteers were not needed or were not able to volunteer.  As a result there are uniforms for 28,000 volunteers that remain unused.

Municipalities across the country are now wondering what to do with these uniforms, that were paid for with tax payer money.  More than 1.7 billion yen was spent on volunteer uniforms for the 2020 Games. Depending on what items are included, the cost of one uniform set was between 22,000 and 40,000 yen.  Some uniforms are being stored in private warehouses at additional costs.

Because the uniforms have the official Olympic emblems on them, there are strict rules about how they can be used. No one seems to want to make the final decision on what to do with them.

Sapporo, which was the location of the marathon and race walking events donated approximately 100 uniforms to schools for the visually impaired for use in goalball events, which is a sport played by people with visual impairments.

Yuji Nakamura, professor at Utsunomiya University with expertise in sports administration said it is important to be transparent in how the uniforms are used.  In the meantime, they are sitting in warehouses.

What do you think should be done with them?

Wow… I never thought about this! Donating to schools in need seems an obvious answer, or donating to sports teams, but of course coming from outside the culture I have no idea whether this is appropriate. Here a volunteer group I belong to recently removed logos from some exercise shirts so that they could be used by schools. The logos were small and there were not 28000, though!

First we need to know what the strict rules about how they can be used are.
I have two ideas:
If possible why not use the uniforms for local 'Olympics', I mean marathon races etc within prefectures or towns. Let each person who takes part pay for and then be able to keep the uniform. Maybe before they are put in circulation a print or stamp to make them less official should be added. 'Save the planet - reuse uniforms' could be a good slogan.
Or, you can always cut them up and make quilts!

I worked on the Melbourne Commonwealth Games (2006), and at the end of the games the English team sold off a container-load of stuff they didn't want to have to ship back to England. I bought a couple of pairs of sandals, and a fleece jacket that I am still wearing 15 years later! The Australian team also had enormous amounts of uniforms left over, but they were not allowed to sell them to anyone but the athletes.

Just yesterday I saw an elderly man wearing the volunteers uniform from those games. I presume he actually was a volunteer back then, and remembers it fondly. Or perhaps he was wearing it because it was quality clothing that hasn't worn out!

I hope Japan comes up with something creative to do with the unused volunteer uniforms. It is a shame to have them just sitting in storage.

Pamela: How sad that they are just sitting in a warehouse, how about making quilts for the needy and elderly, that way they cannot be worn, just used for warmth.

I would give them to the poor or needier. Or doing something with the fabric.

I guess the official logo is an issue, but I think it would be a great idea to use them for charity events that involve sports in some way.