I’ve become interested in UNESCO’s World Heritage sites and read in the Wall Street Journal online the other day that Japan’s highest peak, Mt. Fuji, may soon get World Heritage status. The 3776 meter peak has represented Japan and been the center of Japanese art for centuries and many people wonder why it has not been named as a World Heritage site already.  The popularity of the volcano and ease of access (319,000 visitors climbed Mt. Fuji between July and August last year) have left the mountain side defaced by litter and human waste.  Japan’s government was reluctant to nominate Mt. Fuji as a World Heritage site because of the embarrassment of possibly being rejected. The current nomination has emphasized the mountain’s religious and cultural standing in Japanese life, art, and history.


The Japan Times online reports that a UNESCO panel has recommended that World Heritage status be granted to Mt. Fuji and that it is expected to be formally listed in June when the World Heritage Committee meets in Cambodia. If approved, Fuji will be Japan’s first registered site since the historic Hiraizumi area was listed in 2011.


Climbing Mt. Fuji is already on my bucket list, but I would like to see it receive the UNESCO designation.

My Former Ballet Teacher
Check out this video of my former ballet teacher being interviewed.  She is still dancing at 90 years old and is amazing!


The yo-yo making continues at my house.  I’ve gotten a little mixed up on the count, but I think there are about 250 in the lunch box now.  Maybe 100 or so more, then I will start laying them out to put together. 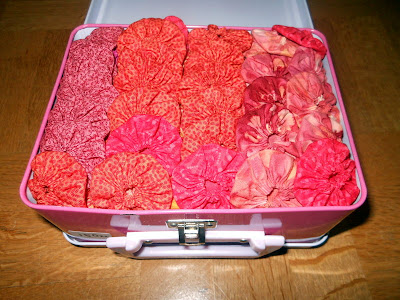