Tourists - Thank You for Your Cooperation 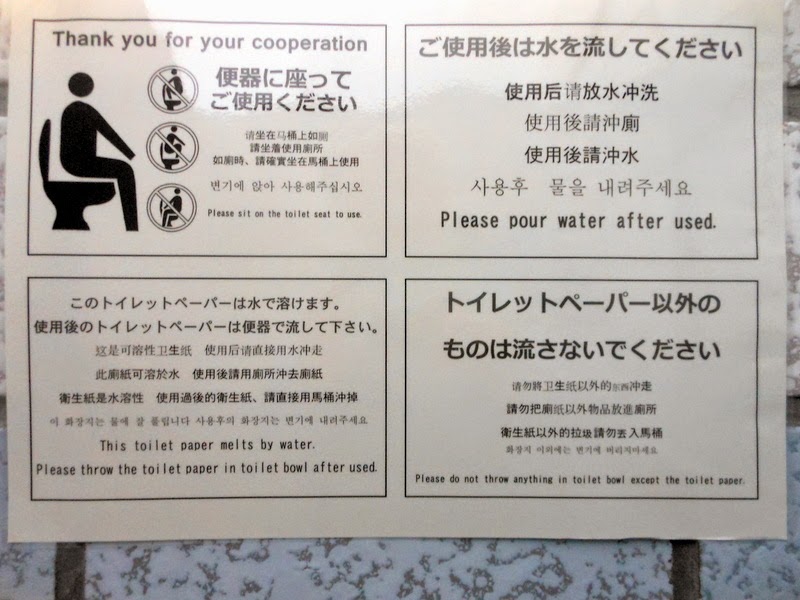 When I first came to Japan in 1978 there were more Japanese squat style toilets than western ones, and the 'how to sit' explanation was needed as many Japanese were not familiar with the 'modern' western style.
'This toilet paper 'melts'' has also its roots in history. Toilet paper in 1978 was hardly ever supplied in the public toilets at station e.g. and we all had to carry pocket tissue paper (in some places you can still see tissue paper vending machines outside public facilities, although unusual). Now there are two kinds of tissue paper in Japan. The one you get in boxes (Kleenex and the like) contain small amounts of plastic and does not dissolve in water. Most pocket tissue paper however is free from plastic and 'melts' in water - does not clog up the drains. In olden times when many households/stations etc had no WCs, paper was not thrown into the 'hole' but placed in a litter bin together with sanitary napkins (and later burned I guess).
I just wish the Japanese Ministry of Education would do something about English education - it is just as old fashioned and quaint as the usage of loos in Japan!

LOL....serious?! That's a real sign!?? I suppose I shouldn't laugh.....but that's strange!! Thanks for the chuckle Pamela :D