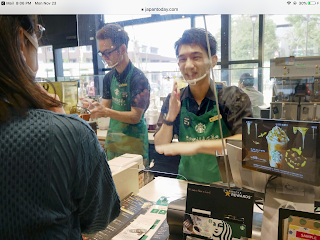 There is not a Starbucks in the town I live in, but sometimes when I travel, I will get a Mocha Frappuccino at an airport or at a nearby train station.  It is a popular chain in Japan. I was interested in a story about a western Tokyo store staffed by hearing impaired workers.  It is raising public awareness of sign language after opening as the coffee chain's first signing store in Japan.

Customers at this Starbucks in Kunitachi don't need to use sign language to order, but if they want to, there are simple instructions on the shop's wall. Ayaka Yamada, a spokesperson for Starbucks Coffee Japan Ltd. said, "We hope to develop the coffeehouse into a place where staff and local people can make connections while making sign language familiar to everyone."  I think this is a great idea!  The store has 23 full and part time workers, with 19 of the 23 having hearing impairments. It opened in June and is the fifth outlet worldwide to operate using sign language as its main mode of communication.

Do you know of any other chains offering a sign language shop? Have you ever visited one?

Email ThisBlogThis!Share to TwitterShare to FacebookShare to Pinterest
Labels: Starbucks

That is a fantastic idea. Hopefully it will help people to be more understanding. I don't know of anything like that here, but I do go to a café near Geelong where the people have intellectual difficulties and they are the serving staff.

No, I have never heard of, nor visited such a shop. I agree it is a great idea, as it is important that all members of society can be active and mix with each other.
Organisations supporting visually impaired people in Japan have made many changes - the yellow pebbled lines on pavements and platforms, braille on banknotes and canned drinks, pedestrian crossings with sound among others.
Returning to hearing impaired people, have you noticed how many of them are quilters. At almost every quilt show I have been too I have watched groups of women engaged in soundless laughing and eager discussions.

That concept is very new to me -- but a good idea.

I think it's a great idea! I'd love to learn a little sign language.