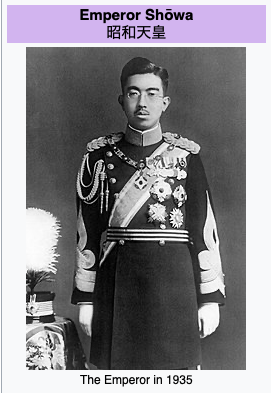 Today is the first day of the Golden Week holidays, Showa no Hi or Showa Day. It is the birthday of the former Emperor Hirohito (grandfather of the current Emperor). During his lifetime, his birthday was celebrated as a national holiday, as are the birthdays of all Emperors during their reign. When he died in 1989, April 29th became the Greenery Day holiday.  In 2005, Greenery Day was moved to May 4th and April 29th was changed back to the day remembering the Showa Emperor.

Emperor Hirohito was the reigning Emperor from 1926 - 1989, before, during, and after World War II. The purpose of the holiday is to reflect on Japan's Showa period when the nation recovered after turbulent times and to think about the country's future. You can read about his life on Wikipedia here.

I don't know how much people really reflect and think. In normal years, it is a time to travel. This year, because of the ongoing pandemic, there is a lot of pressure to stay home over the holiday week. Very few people have been vaccinated so far and the new variants are making the news as being more contagious. I won't be traveling anywhere, but I might be walking around my neighborhood.

I suspect it's like here -- you get a day off and you aren't thinking -- you are doing all the things you don't get to do when you don't have that day!

When April 29th was called Greenery Day I often went to the garden centre to buy some plants.
With the pandemic restricting our movements, I won't do that this year.
Maybe I will watch a film made during the Showa era instead.

Pamela: It is something to see how decorated he is so amazing.
It is also nice that he has his own day of memory.
I am not taking the vaccine due to not enough study has been done but hey that is me, many of my friends have received the shot with terrible side effects, one has been sick with a cough for almost two months.

Have a lovely day

I think there are many public holidays that now days are used as a recreation day rather than a day of thinking one exception here and in NZ would be ANZAC day when we remember those who have given their lives for us. Although I wonder if in time that will just become another day off too.

Maybee some people actually wll think and reflect this year if they don't get to travel as much!