The Bus Drives Itself 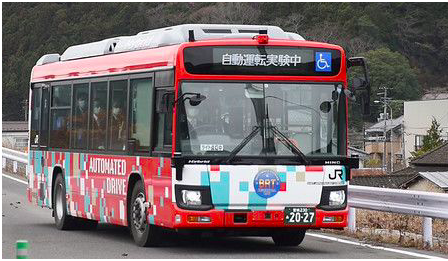 Tomorrow JR East will begin operating a self-driving bus on an exclusive road built on a former rail track in a coastal area in Miyagi Prefecture. The bus can reach a maximum speed of 60 kilometers per hour and uses sensors to detect magnetic markers embedded in the road. JR East Executive Vice President Katsumi Ise said "Measures that are in line with changes of the times are important". He stressed the significance of exclusive roads for buses and self-driving technology to maintain means of transportation in local areas.

From the picture, it looks like there is still a person in the driver's seat, even if no one is driving. With the road sensors and the exclusive roadway, and a possible back up driver in the seat, it sounds pretty safe. What do you think - do you want to ride a bus that has no driver?

Email ThisBlogThis!Share to TwitterShare to FacebookShare to Pinterest
Labels: MiyagiPrefecture

The bus is operated with lots of exact sensors. I want to have a chance to get on it. Some bus companies are developing a self driving bus that can run on a public road safely.

If it is on an exclusive road, would be a bit nerve wracking though.

I think putting it on an exclusive road eliminates most of the remaining risks of selfdriving vehicles. I'd try it out!

We're switching to electric buses here -- but the driverless still has me worried!