I haven’t remembered to take my camera to the garden much this year.  While Ted was gone the last two weeks, I walked out each day (40 minutes each way), so I had to plan for about two hours garden time each day between walking and gardening.  Yesterday Ted drove us in the car and it was a much quicker trip.  We passed by the cemetery on the route to and from the garden.  This week is Obon in Japan, which is an annual Buddhist event where it is believed that the spirits of one’s ancestors return to earth to visit family members.  People return to their hometowns and clean up the grave sites and leave favorite food and drinks for the ancestors. This article gives advice on what to do at your ancestor's final resting site during Obon. Our town's cemetery had four policemen directing traffic in the area because there were so many cars at the cemetery. I noticed that Jizo had a new set of red clothes and there were some vendors selling flowers outside the gate.

Anyway, this is what we picked from our garden yesterday – lettuce, tomatoes, green peppers, broccoli, and cucumbers. 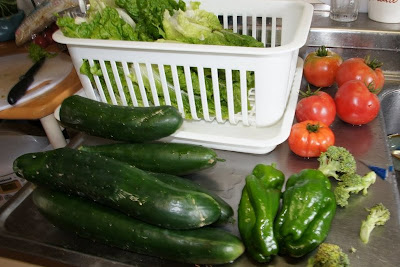 Yesterday in Hokkaido, it was a comfortable 75 F according to our balcony thermometer, but much of Japan is experiencing a severe heat wave. The Japan Daily Press reports that since 27 May, 39,944 people have been hospitalized in Japan for heat stroke and 78 people have died from the heat. The Japan Meteorology Agency predicts this heat will last at least through next week. The article says if you want to escape the heat, you best head to Hokkaido. Aren’t we fortunate to be here already?


About dark last night, we could hear drums and music, so we followed our ears and ended up at the Bon Odori celebration at Ayame Park. Bon Odori is the traditional dance event held during Obon.  Each area has its own song and dance.  As soon as we arrived, we were welcomed and given a plate of food (which consisted of a boiled egg,  a chewy white thing, and some fried tofu with a sauce over it all on a stick and a bag of frozen edamame) and a beer and invited to join in on the dancing, which I did while Ted took pictures. There were three big drums plus the recorded song that played over loud speakers over and over. Everyone dances around in a circle, following a woman at the front of the line.  I just tried to follow the movements of the people in front of me.  Quite a few people came over and wanted to talk with us. Ted was surprised to see one man who recognized Ted from the ski shop where Ted bought his season ski pass last winter.  We can never be anonymous here.  We had such a good time, we will probably go back again tonight. (There are several YouTube videos that feature the Hokkaido Bon Odori song and dance, if you want to hear and see it.) 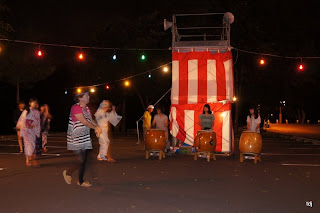 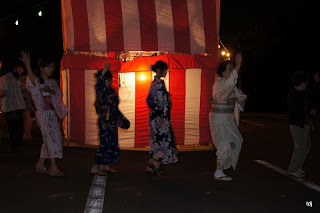 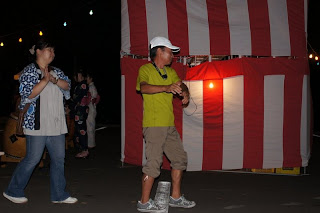 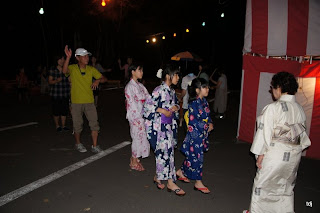 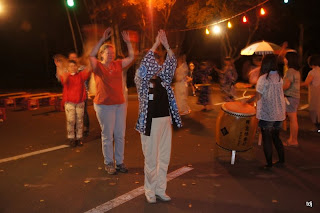 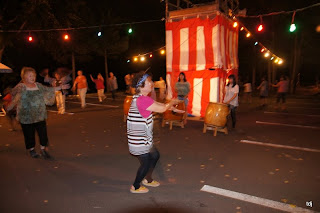 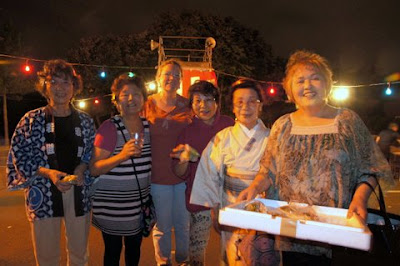 I've been in Europe and missed the Obon festival for the last 20 years but before that I used to take part, both in visiting the family grave and in the dancing.
Hokkaido seems to be the place to be in hot August!