People in Japan are very proud to tell you that Japan has four seasons. With this in mind, I’ve started a new project and so far it has been very fun to work on. Awhile back I made a meishi holder and thought I would make one for Ted also. First, I basted a rectangle, then divided it in four for the four seasons. 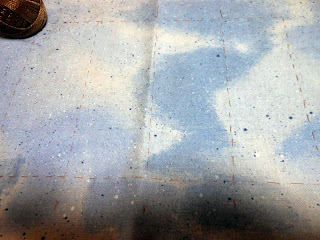 Using Soy Luster and chain stitches, I made a tree.  I didn’t draw anything on the fabric, I just stitched, then added more stitches. 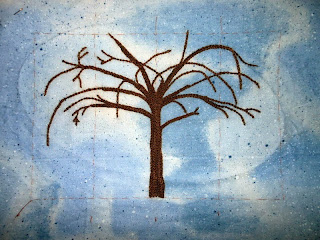 The order of the seasons, from left to right, will be summer, fall, winter, and spring.  I pulled more Soy Luster in some possible colors to try out for three of the seasons.  I’ll have to use some other kind of thread for snow. 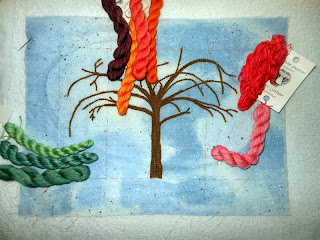 I put in some green leaves for summer and might add more later. 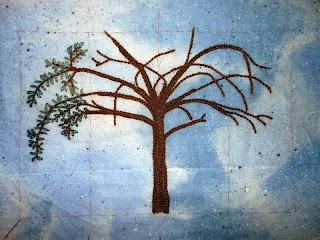 For spring, I made flower blossoms. 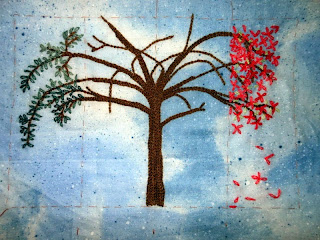 I hope to work on this some more today. Japan has four seasons, not just two.
Posted by Pamela at 4:00 AM

Email ThisBlogThis!Share to TwitterShare to FacebookShare to Pinterest
Labels: Japan has 4 Seasons

My you are so clever. I think this looks fantastic and can't wait to see your progress.

It's a great idea. The tree looks fantastic.

You stitched that tree freehand?! Great, you can really draw with a needle. The idea of a Japanese four season tree is great, placing it on a business card case is smart as the cards will be used at any season!