On July 12th, Mattel added a new Barbie to its collection - Japanese tennis player Naomi Osaka. The new doll was designed by Carlyle Nuera, who also designed Barbies of Billie Jean King, Ella Fitzgerald, and others.

The doll comes wearing Osaka's 2020 Australian Open outfit and comes with a visor, a tennis racket, a tennis ball, a sweatband, shoes and a doll stand. It sells for $29.99 on Barbie's online shop. I read that she is already sold out. 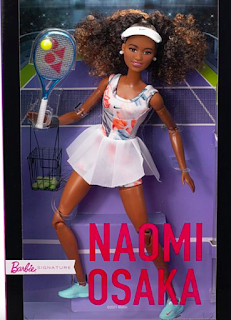 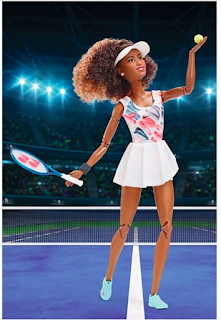 In an Instagram post, Osaka said she hoped it reminds every child that "they can do and be anything."

When I was young, Barbie dolls were very popular. I had many versions of Barbie and lots of clothes and carrying cases.  I sewed (by hand) tons of outfits and accessories for them to wear. I don't remember any famous replica dolls.  Maybe they were made but were too expensive for my family to buy.  When I was in High School, I gave all of my Barbies and stuff to my younger cousin. Did you play with Barbies when you were young, or are you a collector?

Here is a page with Barbie history if you are interested.

No Barbies in my childhood or house , just home made toys.

I didn't have a real Barbie, just a cheap knock-off version. I enjoyed dressing her up.

I didn’t have a Barbie doll, also a cheap version, can’t remember the brand. I used to love styling her hair. My daughter also didn’t have Barbies, Cabbage Patch dolls were the in thing at the time.

I got my first Barbie in 1963 and my grandmother was horrified to see a doll with breasts and high heeled shoes.
I had so much fun with this Barbie and the following dolls - one more Barbie, a Ken and a Skipper. At first the clothes were all store bought, and I favoured the haute couture, tailored look. Then I started making some clothes myself for her, but they were very simple.
They dolls were an important part of my childhood. I never had a replica doll, but think the idea is great to remind us that we 'can do and be anything'.

Yes, I had Barbies. The first one, probably a gift, was a Barbie. All the others were the Barbie Francie model. My mother was not thrilled about the exaggerated Barbie figure, but Francie was okay. Had one with interchangeable wigs, a "quick curl" (but her hair got frizzy) and Malibu Francie too. Learned to sew making clothes for them, and I had some cool vintage patterns from a relative. I also made furniture out of random bits of things. Had a lot of fun and creativity with them.

I used to sew clothes for my (mostly off-brand) Barbies too, but I was reeeeally bad at it haha :D
A couple friends of mine have a collection of collector's Barbies. Some of them look really cool, but I don't think they'd be good for kids to play with.