Some People Are Allowed to Smile a Little 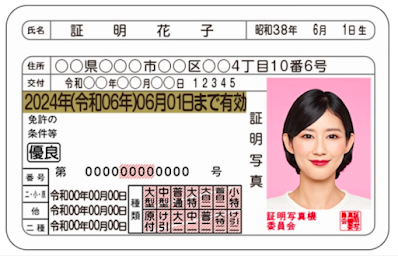 The Police Departments are in charge of issuing driver's licenses in Japan. The National Police Agency asked local departments to take a look at their license photo regulations and let up on unnecessary restrictions. Osaka and Tokyo decided to drop their rules against smiling in the license pictures.

I don't have a Japanese drivers license, but I looked at my now expired North Carolina (United States) license and I'm smiling. I read that the no-smiling rule was in place so that the person's face was in a natural, undistorted expression. So, even though drivers in Osaka and Tokyo can now smile for their license photo, they can't smile very big. Corners of the mouth are allowed to curve up, but lips must stay closed and eyes must remain open.

I haven't heard about any changes in the photo requirements where I live, so maybe no little smiles here. I'll have to ask my students to see what they know about it.

Are there smile or no smile rules for driver's licenses where you live?

Email ThisBlogThis!Share to TwitterShare to FacebookShare to Pinterest
Labels: DrivingInJapan

I just went and looked at my licence, and I am smiling. Like the one in the post, maybe happy to get a gold license...?

I don't know if you can smile on a Swedish driving license, passport or ID card.
Some years ago though, there was a very unique rule - instead of facing the camera straight ahead, you had to turn slightly away from the camera so that one ear was visible. The reason was that everyone has unique ear features and they could be used to correctly identify an individual.
The problem was that immigration officers across the globe saw the Swedish passport as a fake and there were lots of problems for the poor traveller.
It can't have lasted long, I have only once such passport, the next time (five years later?) I was asked to look straight into the camera.

I think we can smile a little bit, but not a full on laugh!!

I don't remember anything about driver's licenses (definitively smiling on mine) but I wasn't allowed to for my passport!

I will smile at the next licence renewal.

Never heard before about rules regarding smiling in photos. (By the way I usually don't smile during photo taking. No particular reason).

Hi Pamela: Interesting rules, never thought about smiling when my photo was taken for driver license.

No smiles allowed on our drivers' licences.

I've always smiled for mine. They are some of my best photos!

I live in Connecticut and was allowed to smile in my recent drivers license photo but not my passport.