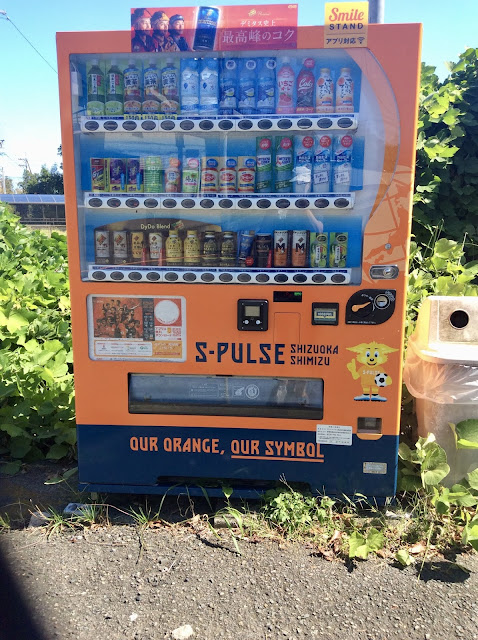 Recently, I started noticing these big orange vending machines around town. Orange is the team color for the local professional soccer team. I don't know if it is to show team spirit, or if the machines belong to the team and they get the profit, or something else. I think it is strange that the words on the machine are in English and not Japanese.  I have not met another person living in this little town who speaks English as their first language. This is another mystery.

Well, why not? Orange is a cheerful color and it livens up the merchandise and everything around it.

Pamela: I have to admit it is strange but fun, walking along and it hits you I need a drink, it looks like they may be energy drinks and coffee, I have heard of the DyDo Blend coffees, I see a cola in there also.
It reminds me of the coolers that Target has by their check-out counters.

Have a great day
Catherine

The team seems to be using the team color orange for promotion. The vending machines in the picture have drinks from varios manufacturers.
So I think the operation is team or sponsor. If the drink maker operates a vending companies will be listed.
As it suddenly became cold,more hot drinks from the vending machine.
I don't know why use English.
Did the pronunciation pass?

I think the English is there to give a 'cool image'. It is a typical Japanese trick, and has no practical use at all.

Quite a few people in this country might still have a longing for the western culture or they would feel that the shapes of the alphabets are better looking than the Chinese characters.

That is interesting about the English on the machines. And seeing them pop up around town.

Interesting to see a vending machine just on the side of the road, even better to see a rubbish bin nearby.

There are lot of things in English here too, mostly on posters and stuff like that. I think it just sounds 'cool' to some people.