The Turtle That Stopped a Plane 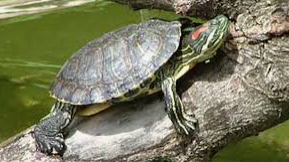 Don't you just hate when your flight is delayed? Maybe the plane hasn't come in yet or there are mechanical problems.

Recently a flight leaving Narita Airport for Naha, Okinawa was ready to take off at about 11:30 am, when the pilot made this announcement: "I've just gotten word that a turtle has intruded on the runway we were to take off from... just now on the runway... so we have to stop temporarily..." It  delayed the flight about 10 minutes so the turtle could be removed from Runway A, but no one seemed to mind.

The turtle was identified as a red-eared slider, a species native to the southern part of North American.  It is considered to be one of the most invasive species in the world and now is invading airports.  The red-eared slider at Narita was about 30 centimeters long and weighed about two kilograms. It is unknown whether this was a pet that was abandoned in the wild by owners, born in a nearby river and wandered further than usual, or as one pilot speculated was an escapee from someone's luggage.

Good to see the turtle wasn't run over.

Did you know that that aircraft itself was a turtle?
https://www.businessinsider.com/a-japanese-airline-revealed-its-new-hawaii-inspired-plane-that-looks-like-a-giant-sea-turtle-2018-12

As you can Seein Queenie-san comment. The plane is a“flying honu”with a blue turtle drawn ouit. Originally this plane is a regular flight from Narita Airport to Hawaii. However,due to the pandemic,it was not the original plane,but this time I was planning to head to Okinawa from Narita Airport.
Sea turtles are considered sacred creature in Hawaii,so they seem to be specially drawn.
『Honu plane encounters a real
turtle 』
Passengers also understood the reason for the delay,and the atmosphere the plan was calm.
However,this red-eared slider is an exotic species. Another issue is covered in the news. I think human responsibility is also great.

Pamela: They are very invasive in some areas.
But stopping a plane is amazing, the small creature has a lot of power to do so.

Invasive or not, I'm glad that the plane stopped and didn't just run over the poor turtle!

I'm glad they didn't run over the turtle but you'd think someone would just march out there, pick him up and put him in a safe place!