Blizzards are for Beading

Yesterday was the most blizzardous weather I’ve seen since I’ve been here.  All day long it snowed and blowed and was a big white out.  It snows a lot here, but it isn’t usually so windy. I don’t know how much it snowed but the cars in the parking lot are big white mounds. There must be some big snow drifts somewhere with all that wind yesterday.  Today the snow is falling politely.  No wind so far.

With all that weather going on outside yesterday, we stayed inside. There was no where we needed to go and even if there was, we would have waited a day.  I continued working on the beaded box until I finished it.  It isn’t perfect, but I’ve learned the process. 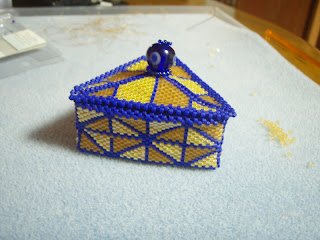 You can see the inside lid had a little ledge so it fits the box. 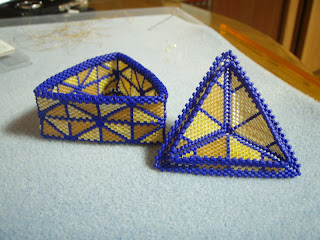 I have an idea for another little triangle box. I’ll be working on that soon.


After I finished the box it was still early and I still had all the beads out.  I pulled out the EGA Correspondence Course, Beaded Nutcrackers, by Kathleen Rake.  The subtitle for this course is “A Study in Constructing Flat Odd-Count Peyote Stitch, Demystifying Increases/Decreases on an Odd Shape.”  When I signed up for this course I fully intended to stitch the four nutcrackers and send them to the teacher for evaluation. I bought all the beads in the colors the teacher had listed from a company she recommended instead of trying to use the beads I had in colors that were close.  The receipt was still in the bag with the beads and instructions – February 2008. I even had the needles and thread in the package. It was all ready to start. That’s as far as I got with this project. Last night I started the first nutcracker and this is what I’ve done so far. 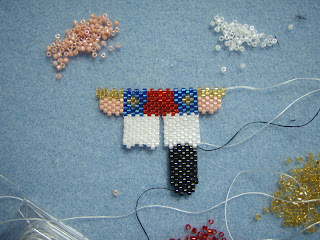 Email ThisBlogThis!Share to TwitterShare to FacebookShare to Pinterest
Labels: Beads

The box is beautiful! I'm glad that the hem process isn't going to stop you from making another one - I can't wait to see it!