Eve of Beginning of Spring - Setsubun

Setsubun, although not a national holiday, is a festival held on February 3, one day before the start of spring according to the Japanese lunar calendar. For many centuries, the people of Japan have been performing rituals with the purpose of chasing away evil spirits at the start of spring.


Around the 13th century, it became a custom to drive away evil spirits by the strong smell of burning dried sardine heads, the smoke of burning wood and the noise of drums. While this custom is not popular anymore, a few people still decorate their house entrances with fish heads and holy tree leaves in order to deter evil spirits from entering.
Today, the most commonly performed setsubun ritual is the throwing of roasted beans around one's house and at temples and shrines across the country. When throwing the beans, you are supposed to shout "Oni wa soto! Fuku wa uchi!" ("Devils out, happiness in"). Afterwards you should pick up and eat the number of beans, which corresponds to your age.  In households with children, the father will put on the oni (demon) mask and the children will throw beans at him.

Another tradition for Setsubun is to make and eat the Maki Sushi.  Eating it beckons happiness. My neighbor invited me to her apartment to teach me how to make the maki sushi. I had fun even though I’m not crazy about food preparation. I might try making this again.


The recipe we used was Okuda San’s mother’s recipe, but she said you could put anything you like on the inside. The ingredients we used were:
Vinegared rice
Laver toasted
Gourd strips
Shitake mushroom
Omelet
Cucumber 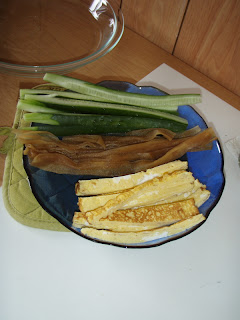 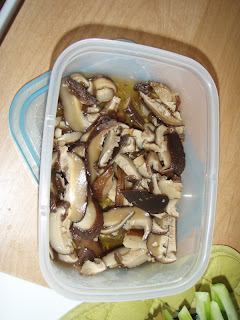 You need a little bamboo mat thing to roll it up in. 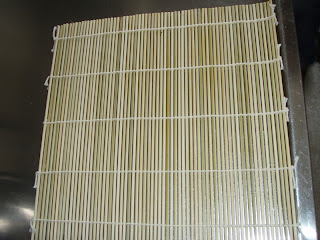 First you put the laver toasted on the mat, rough side up (which will be inside).  You need water on your hands to pat out the sticky rice to cover about about  2/3 of it. 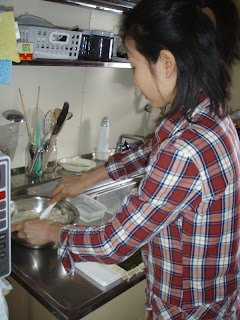 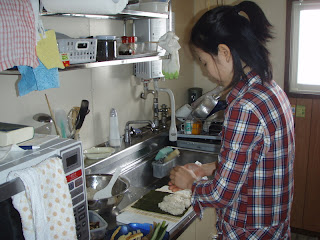 Draw a little line across the rice and add mushrooms and the other ingredients. 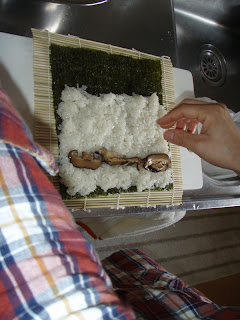 First you fold it across to the edge of the rice, then roll it up. 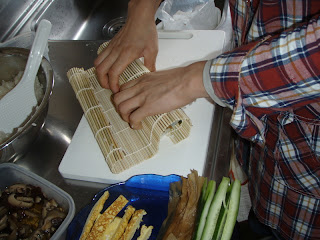 After she showed me once, I did it. 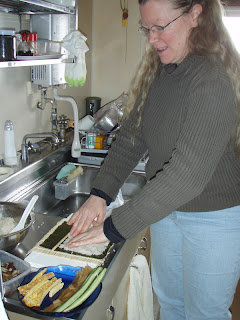 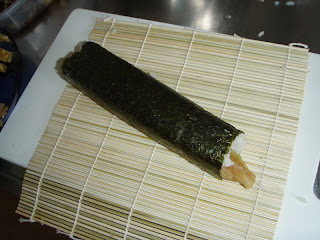 If yesterday was the Eve of the Beginning of Spring, does that mean today is Spring? 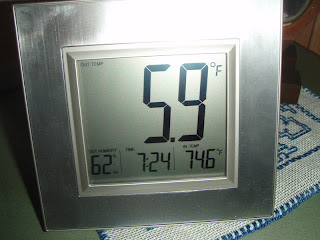 Hardanger Heart
I pulled out this Hardanger Heart ornament project by Linda Discoll.  I don’t remember when I acquired this project or even working on it, so it must be old.  I don’t know why I didn’t keep working on it and finish it, after I started it.  I have been known to put away a project when I’ve made a mistake, but that doesn’t appear to be the problem with this one.  It’s a small project so maybe I can finish it soon. 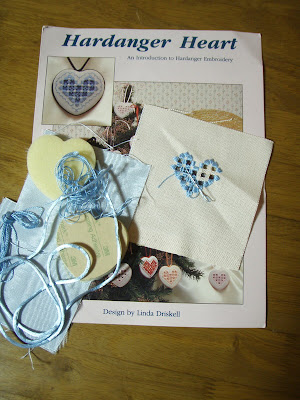 Email ThisBlogThis!Share to TwitterShare to FacebookShare to Pinterest
Labels: Hardanger, Living in Japan