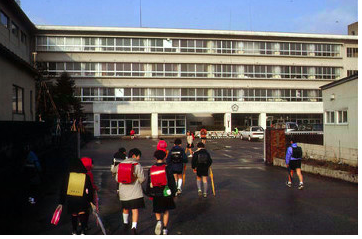 Because there are so many earthquakes in Japan, I expected schools to  have earthquake standards.  I was surprised when I read that nearly 100% of Japan's public elementary and junior high school buildings meet those earthquake resistence standards.  That is amazing.

According to a survey conducted by the Ministry of Education, Culture, Sports, Science and Technology (MEXT) in April 2021, 99.6% of 114,410 elementary and junior high school buildings, gymnasiums, and other facilities in Japan have been retrofitted against earthquakes with a seismic intensity of 6 or higher. There are still 88 municipalities that have yet to complete earthquake proofing (444 buildings across Japan).

Nineteen prefectures, including Miyagi, Akita, Tochigi, Saitama, Chiba, Kyoto, and Kumamoto, have a 100% quake-resistance rate for school buildings. The prefecture with the lowest rate is Okinawa with 96.8%. The quake resistance rates for other types of public schools are also high, with 97.1% for kindergartens, 99.1% for high schools, and 99.7% for special needs schools.

Where I grew up, earthquakes were not common, but tornados were.  I wonder how safe the school buildings of my childhood were.

Where I grew up, even a tornado was a rarity. The school where I have recently worked, even keeps packs of dry food in case of an emergency. When it nears expiration date, they donate it to our church's homeless mission. We all need to plan ahead.

It is great that measures have been taken. I must say, though, that a school might still be a dangerous place in the event of an earthquake. The building may stand, but window panes, ceiling panels are likely to break and fall. Also there is the risk of fire. I hope as many of these risks have been addressed, too.

We rarely get tornadoes or earthquakes, but our buildings are pretty sturdy. I wonder how they'd fare in a different area.

I have experienced many earthquakes since I was a child．Most of them are small earthquakes. Maybe many Japanese are the some as me.

It was after the Great Hanshin Awaji earthquake in 1995,that began to hear the word Earthquake-resistant. And since the Great East Japan Earthquake in 2011,I have come to see And hear more often.It's a ward I
didn't know when I was a kid. When I think about It now,the school I attended may have been dangerous.

Pamela: This is very interesting, maybe the USA could take notice of how there building are built in Japan and build in areas like California, I think it is a great idea.
Thank-you for sharing this information.

That's good news for the schools in that district. I would think it would be comforting to the families.

It is great that the children and staff are protected. We had a 5.8 earthquake last week, I didn’t feel it as I was outside hanging washing on the line. My neighbour said her bed was shaking. My husband was stopped at traffic lights and his car shook.

That is great the buildings are made safer.