Today (Monday) is a national holiday in Japan – Coming of Age Day.  According to Wikepedia: “Coming of Age Day is a Japanese holiday held annually on the second Monday of January. It is held in order to congratulate and encourage all those who have reached the age of majority (20 years old) over the past year, and to help them realize that they have become adults. Festivities include coming of age ceremonies held at local and prefectural offices, as well as after-parties amongst family and friends. Coming of age ceremonies have been celebrated in Japan since at least 714 AD, when a young prince donned new robes and a hairstyle to mark his passage into adulthood. The holiday was first established in 1948, to be held every year on January 15.  In 2000, as a result of the Happy Monday System, Coming of Age Day was changed to the second Monday in January. … Many women celebrate this day by wearing furisode (a style of kimono with long sleeves that drape down) and zōri sandals.  A full set of formal clothing is expensive, so it is usually either borrowed from a relative or rented rather than being bought especially for the occasion. Men sometimes also wear traditional dress (e.g. dark kimono with hakama), but nowadays many men wear formal Western clothes such as a suit and tie more often than the traditional hakama.”


I planned to spend the day at home stitching, but I learned yesterday afternoon around 2:00 pm that the ceremony here would be held Sunday afternoon at 4:00 pm at an event hall near the train station. (Thank you Kyoko San for your email message!) I hadn’t been so far from home on my own since coming here and Ted is working this weekend – 3 days skiing at a downhill resort with students. (I know, I know – this is work?)  I didn’t know exactly where the event hall was located, but I had been to the train station before, so I thought I could find it.  If I didn’t go on my own, I would have to wait until next year to see the 20 year olds in their kimonos.  What was the worst that could happen? Even if I fell in the street and was run over by a car, I had my alien card in my pocket so they would know who I was.  I decided to go.  It was snowing hard and about 22 degrees F, so I knew to wear slick pants and slick shell over my down jacket so the snow wouldn’t stick to me and melt.  I brought along my little pocket dictionary, even though I didn’t think it would help me if I needed to ask for directions. 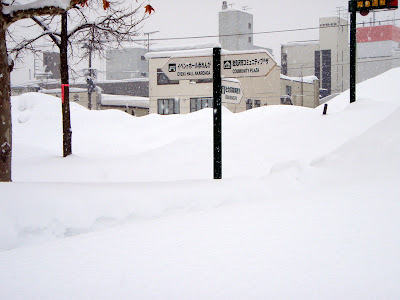 I did find the event hall and stood outside watching the 20 year olds arrive for about half an hour.  Unfortunately, my camera battery died quickly in the cold, so I was only able to take a few (bad) pictures.  The kimonos were beautiful.  Most of the young men were wearing dark suits, but a few were wearing the men’s version of the kimono. The hairstyles for both the men and the women were elaborate, with flowers and jewelry in the hair of the women. The women all wore shoes that were like a red patent leather flip flop inside of a clog.  The snow was coming down hard, landing like sparkles in their hair. 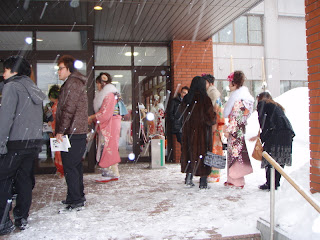 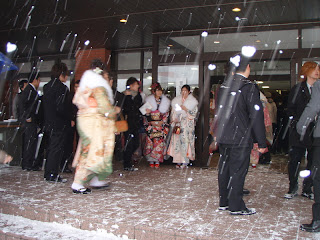 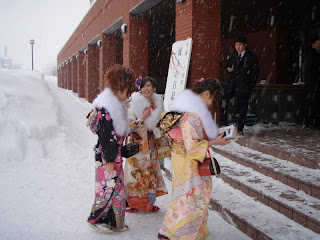 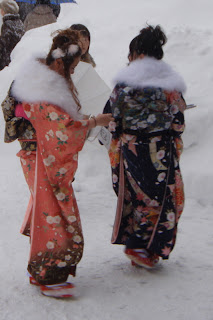 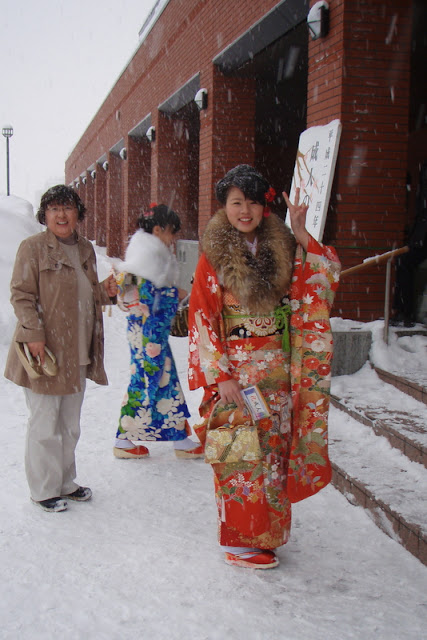 I’m so glad I went! I wish I had better pictures to post.  Maybe next year I can go and watch the ceremony too.  I know Ted would have taken some wonderful pictures if he had been able to go with me. How exciting to be 20 in Japan!


Finished and waiting to be used.  I finished this cross stitched pot holder earlier in the day yesterday. 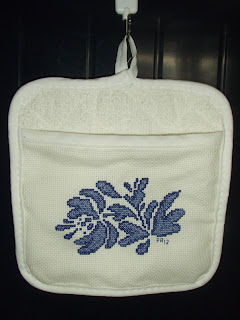