I have written before about the Japanese writing systems – hiragana, katakana, and kanji. The Japanese Ministry of Education designated about 2000 characters as Jouyou Kanji, which are the most frequently used characters.


Furigana is the small superscript, usually in hiragana, above the kanji.  Often this is done for the benefit of children, who aren’t able to read kanji or aren’t able to read difficult kanji yet. Another reason for using furigana, is when the kanji is obscure or not easily understood, such as a different dialect. A third reason is to draw attention to a certain way the kanji is to be read.


In books and magazines published before 1945, furigana was used more often because there were many more kanji in use back then. Some of the more difficult kanji words used back then are now written in hiragana.


Karaoke is popular in Hokkaido and although I have not participated in this singing entertainment, I have read that furigana is written above the kanji song lyrics for pronunciation and emphasis reasons.


Anyway, I am always happy to see furigana because I am like the young school child – I can’t read kanji!
Here is an example - a sign near the stream behind the town library. 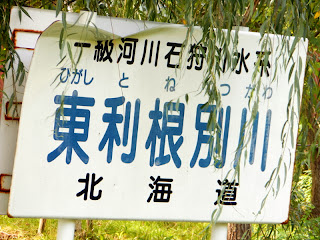 The only kanji I recognize on this sign is the three lines at the end - the symbol for gawa or river. The furigana tells me the sign says higashi to ne betsu gawa, in hiragana. I think higashi means east side and there is also a forest named to ne betsu near where we live.
Posted by Pamela at 4:00 AM

Furigana is really helpful isn't it. I have more of a struggle now to read Japanese as I am not using it all the time. My friends still email me - one is super polite language and another tests me out on difficult kanji. Both frustrate me;-) Japanese kanji are a real test of memory.

Thank you for all the interesting information. Today you taught me something new; I have never seen 'furigana' written in kanji before, 振り仮名, and took out the dictionary to see what those characters stand for on their own. furi=swing, ga=temporary and na=name. As a foreigner it is really hard to interpret the combination of characters, as well as to know how to read them! I appreciate the use of furigana as especially dialects and place names are difficult to 'guess'. There must be lots of dialectal expressions in Hokkaido.

it's for small kids?! I thought furigana was just for gaijin, hehe.
I might be wrong, but I think "betsu" comes from the Ainu word for river. There is an Ainu cultural center somewhere north of Noboribetsu (south of Tomakomai, on the coast, sorry, don't really remember where). I took an Ainu embroidery class there once. I'm sure if you ask around, someone could tell you what I'm talking about..
There also used to be an Ainu souvenir shop in Tanuki Koji in Sapporo, it was called.. "Purika" maybe? I could just be making that up. I spent a weekend learning traditional Ainu stitching there in 2001.. really beautiful stuff.