This past weekend the soba festival was held near the train station in our town.  It rained all day Saturday, but was beautiful Sunday when we attended. 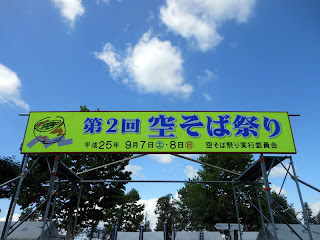 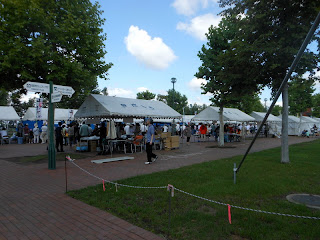 We walked to the event and arranged to meet our friend Reiko, who rode her bike. It looks like a lot of people rode their bikes. 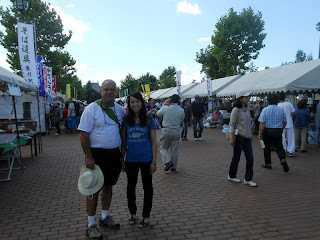 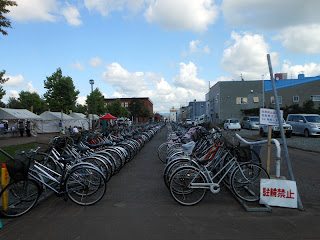 Soba is the Japanese word for buckwheat and is usually used to refer to the thin buckwheat noodles that are popular in Japan.  Buckwheat is mainly produced in Hokkaido, which is probably why there is a festival here.  The whole festival was food and mostly soba.  It was around lunch time when we arrived so the lines were long at almost every place. 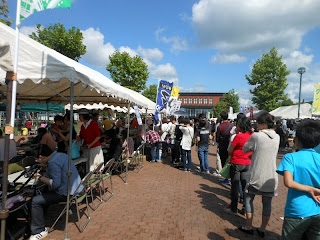 This place was selling packets of dried soup.  They gave us a sample to taste, but we didn’t buy any. 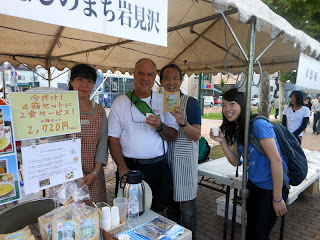 We did wait in line and bought zaru soba with tempura.  I think zaru is really the dish that cold soba is served in, but cold soba is called zaru, even when it is served in little plastic take out dishes. It comes with cold dipping sauce, wasabi, and some chopped green onions. The tempura was mostly pumpkin and onions, I think. 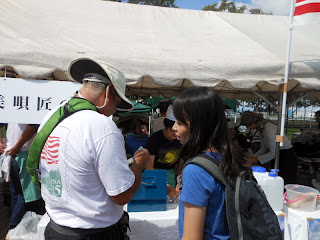 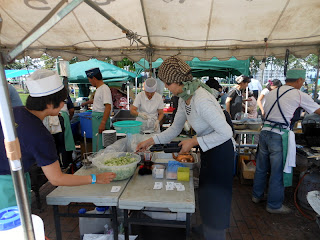 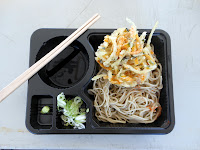 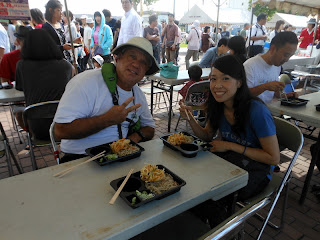 We waited in another long line for dessert.  I had a snow cone, Ted and Reiko had banana-chocolate crepes. 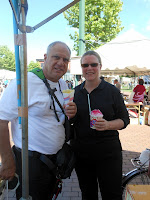 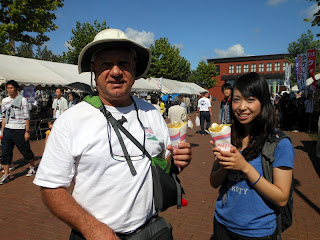 The whole thing was about eating, so once we were done with that, we went home. Next weekend, more festivals!
Posted by Pamela at 4:00 AM

Email ThisBlogThis!Share to TwitterShare to FacebookShare to Pinterest
Labels: Festival, Living in Japan

Yum! I love soba, once I got over the surprise of it often being cold.

And may I say that your embroidery yesterday was simply beautiful. I'm intrigued also by your Italian embroidery: closer to me than Japan so I ought to explore this more. Amusing that I should learn about it on a blog from Japan. What a delightfully strange world we all live in! JJ

I do envy you that experience ;-) Zaru soba has to be my favourite noodle dish and I still get cravings for it. Probably because it is unobtainable in Auckland!

One good thing about zaru soba is that as you have drained the water off the noodles you can eat them hours after cooking them; are noodles served in soup they have a tendency to swell and get soggy. Cold soba is cool food on a sweltering hot summer's day.
It is also good for health; lowering the risk of developing high cholesterol, high blood pressure and diabetes, and is free from gluten.
Happy eating!